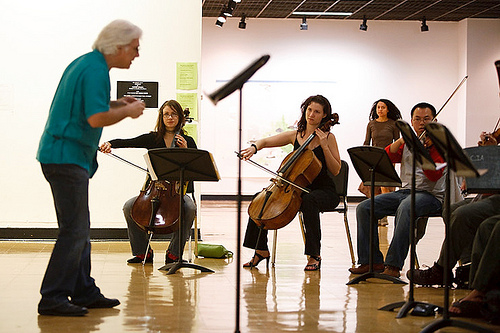 The Stone is a nonprofit performance space dedicated to the experimental and the avant-garde, and it serves as the perfect locale for a two-week Nine Winds concert series curated by composer and multi-instrumentalist Vinny Golia and Thurston Moore, best known as guitarist and singer for Sonic Youth.

Golia, a faculty member of The Herb Alpert School of Music at CalArts, founded the event’s namesake—the Nine Winds record label in 1977—to record and feature the work of West Coast jazz artists. Since its inception, Nine Winds has released more than 100 recordings from dozens of artists, including fellow CalArts faculty members Mark Trayle, Wadada Leo Smith and John Bergamo.

Likewise, the Nine Winds concert series is showcasing a number of West Coast avant-garde jazz musicians—with a decidedly CalArts twist. A number of alumni have been included in the roster of both headliners and accompanists.

Next week, Adam Lane (Music MFA 96) fronts both his trio and quartet for two sets on Tuesday (April 12). Daniel Rosenboom’s (Music MFA 07) Quartet is slated for next Wednesday with his father (and CalArts acting co-president) David Rosenboom playing piano.

The video below is a video of The Daniel Rosenboom Septet playing “Espionage” with Golia on tubax and David Rosenboom on piano.

Nine Winds Concert Series
at The Stone
Avenue C and 2nd Street
Through April 15
Most tickets: $10