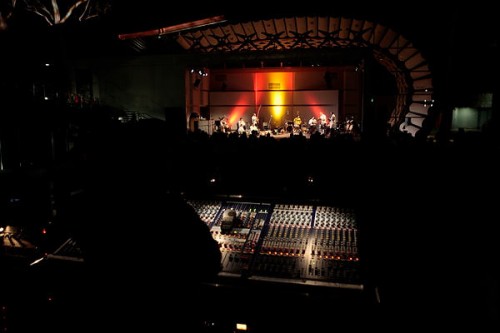 The Wild Beast Concert Series, presented by Levitt Pavilions and produced by The Herb Alpert School of Music at CalArts, presents its first concert—make that concerts—of the year on Saturday (April 23) at 5:30 pm.

Jazz Crossings is being billed as a teleconcert, which will link performers and audiences from two venues: The Wild Beast at CalArts and the Yamaha Artists Services Salon in New York City.

Jazz Crossings begins with a bi-coastal duet, Is Art Is, written and performed by CalArts’ Acting Co-President David Rosenboom with pianist-composer-improviser J.B. Floyd. The composition will be performed on electronically linked Yamaha Disklavier pianos, and data from each piano and venue will be merged with audio and video streams synchronized for the audiences in both California and New York.

They’ll be followed by CalArts alumni Scott Colley’s (Music BFA 88) and Ralph Alessi’s (Music BFA 90) whose New York set will be transmitted to video screens clustered on the concert grounds at CalArts.

The evening culminates with Crossings, a collaborative work between the CalArts’ Latin Jazz Band and the School of Theater. Directed by CalArts’ faculty members (composer-pianist David Roitstein and performer-writer Marissa Chibas), salsa music and stories of those who have crossed borders to live in the United States, will be streamed from the Valencia campus to New York.

Like all performances in the The Wild Beast Concert Series, Jazz Crossings is free and open to the public. RSVPs are recommended.