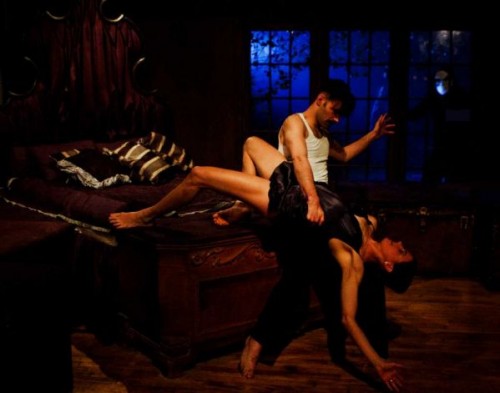 Sleep No More, a site-specific, immersive theater production, opened last week in New York City to great reviews. Developed by the British theater company Punchdrunk, the work moves Macbeth to an abandoned hotel in Manhattan and presents the work through a prism of film noir, with touches of Stanley Kubrick’s Eyes Wide Shut mixed in for good measure.

The lines between space, performer and spectator are blurred in this production. The audience, all required to wear Venetian carnival masks, can follow performers around more than 100 of the McKittrick Hotel’s remodeled rooms. Ticket holders are welcome to explore the details of the set and the action happening around them—the only things not to be touched are the performers themselves.

Two performers in this largely double-cast production are recent graduates from The Sharon Disney Lund School of Dance at CalArts: Nicholas Bruder (BFA 09) as Macbeth, and Jordan Morley (BFA 08) as one of the Witches.

From The New York Times review:

‘Sleep No More’ is, in short, a voyeur’s delight, with all the creepy, shameful pleasures that entails. As conceived by Punchdrunk (which took a similar approach to an operatic version of ‘The Duchess of Malfi’ in London last summer), this tale of regicide taps the same impulses that draw us to Agatha Christie mysteries and sensational tabloids, flavored with the snob appeal of biographies of self-destructive aristocrats.

The idea is once you’re let loose on one of the floors of the hotel, you pick out a single character and pursue him or her (though you can switch any time you want), as the performer runs, dances and vaults all over the place. Dressed in drop-dead, Deco-era evening clothes, scanty lingerie or nothing at all, these characters include the Macbeths (of course), Macduff and his wife (who is conspicuously pregnant), Duncan (the king) and various witches and hotel employees. (Because the roles are mostly double-cast, I am not mentioning individual performers, but they are all lissome enough to make the audience look slow and dumpy.)

Good news for those in NYC and environs—the production has been extended through June 25.