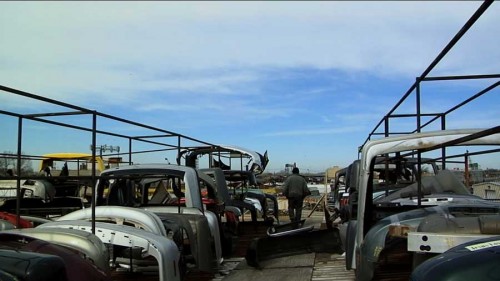 'Foreign Parts' is a portrait of Willets Point in NYC. | Film still

The film is a portrait of Willets Point, an industrial neighborhood in the shadow of the Mets’ Citi Field, also known for its junkyards, auto salvage shops and repair shops. Although the area’s ripe for redevelopment, the feature-length documentary reveals a thriving community and ecosystem that relies on the wrecks and recycling of car parts. The film becomes a study of community couched in the age-old issue of gentrification.

Sniadecki, who co-directed the film with sociologist Véréna Paravel, is also a doctoral candidate in the Social Anthropology Department at Harvard University, so it only seems fitting that the two anthropologists have focused on the stories of people: Joe, the last original Willets Point resident; lovers Sara and Luis, who struggle through the winter living in an abandoned van; and Julia, homeless queen of the junkyard.

The film was screened last month at MoMA and was awarded the Best First Feature and a Special Jury Prize at the Locarno Film Festival.

From The New York Times review:

Without sentimentalizing the neighborhood or its people — and in spite of having only a single legal resident, Willets Point feels, in this film, very much like a neighborhood — Ms. Paravel and Mr. Sniadecki cast an appreciative eye on its beauty. It is not just the compositional artistry of the camera work or the clarity of the high-definition video images that reveal this quality. The persistent puddles (Willets sits in a flood plain) and the body shop signs evoke a venerable, rough, workaday New York, the polyglot poetry of which can be heard in Spanish, Hebrew and English dialogue that is frequently drowned out by the noise of tools and automobile engines….

Embedded in this compact movie are stories of drug addiction and poverty, hard work and jail time. Like the cars, these tales are encountered in fragments. People talk but don’t say too much, and as curious and thorough as Ms. Paravel and Mr. Sniadecki are — “Foreign Parts” is the result of many months of patient filming — they are too polite to pry. But their tact adds to the richness of their film, which discovers a busy, complicated world within the space of few unlovely city blocks.