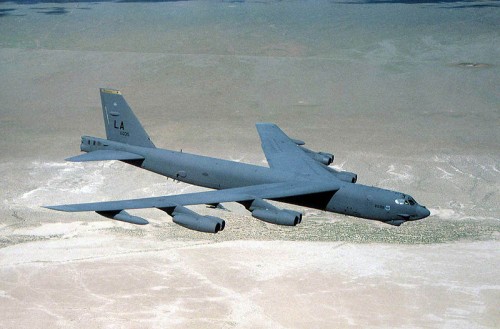 The B-52 aircraft. | Image: Public Domain

Filmmaker, writer and essayist Hartmut Bitomsky visits the Structuring Strategies screening series and class tonight at CalArts’ Bijou Theater to present his feature-length documentary B-52. (The evening serves as a sort of homecoming for Bitomsky, a former dean of CalArts’ School of Film/Video.)

The B-52 was America’s first long-range bomber that took flight in 1952 and began operations in 1954. With a 185-foot wingspan, more than 160 feet in length and weighing in at more than 480,000 pounds, it was originally designed as a high-altitude nuclear bomber aircraft. While it never dropped a nuclear device in combat, the B-52 was used principally as a nuclear deterrent in the Cold War against Soviet communism.

The planes are now obsolete, and many are sitting—deconstructed—four-stories high in the Arizona desert.

Using nothing more than archival footage, interviews and straightforward facts, Bitomsky—the former film critic and editor of the German film magazine Filmkritik—paints a portrait of an American society that invests its intellectual and economic capital into its military machinery.

From a review in Variety:

This sober, non-polemical documentary dispassionately relates the story of America’s B-52 bomber, tracing the history of the aircraft from its inception in the Cold War days of 1947 until now. Filmmaker Hartmut Bitomsky needs nothing more than the cold facts surrounding this awesome weapon to get across a message about the importance of peace…

The overall effect of spending two hours with this material is rather devastating. So much intelligence, effort and money went into producing these weapons of destruction which, there’s no doubt, were successful as a Cold War deterrent, but at what cost? “B-52,” despite its length, sustains its interest in a fascinating subject.

Shot in the U.S., Germany and Vietnam, Bitomsky’s film premiered February 2001 at the Berlin Film Festival. B-52 had theatrical distribution in Germany and Japan and has since traveled the world to many festivals and screenings.