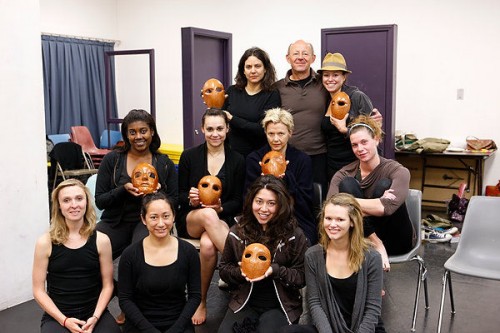 Annette Bening, center, is one of CalArts honorary degree recipients.

CalArts graduation—on May 20—is just around the corner, and when the Institute confers degrees on the class of 2011, two special artists will be among the recipients.

Last week, Co-Acting Presidents David Rosenboom and Nancy Uscher announced that actress Annette Bening and, dancer, choreographer and teacher Donald McKayle will be the 2011 recipients of CalArts’ honorary Doctor of Arts degrees. The two will speak at the  graduation ceremony and share reflections on their respective achievements and careers in the arts.

Bening, a stage and screen actress, earned the Golden Globe in January for her performance of Nic, one of two moms in Lisa Cholodenko’s film The Kids Are All Right. In 2009, she starred in UCLA Live’s staging of the Euripides classic Medea, which also included actors and designers from the CalArts School of Theater. During preparations for Medea, Bening led a few acting workshops at CalArts and was a featured speaker at an all-Theater School meeting, where she provided practical career advice to those in the audience.

On working on difficult productions or unpleasant co-workers: “You got to figure it out because [if you can’t get along with people] you’re only screwing yourself…You have to figure out how to replace the head of that person you hate with someone you’re in love with.”

[Video: Excerpt of Donald McKaye performing in Rainbow ‘Round My Shoulder, which he created in 1959.]

McKayle, who served as artistic director of dance at CalArts in the mid-1970s, is counted among the most influential and prolific figures in modern American dance. During his prolific career—which spanned nearly six decades—McKayle collaborated with a veritable who’s who of the dance world, including Anna Sokolow, Merce Cunningham and Martha Graham.

Free to Dance, a PBS television miniseries that chronicled the role that African-American dancers and choreographers have played in the development of modern dance as an American art form, notes on its website:

McKayle’s sensibilities were formed by the theatrical dance of the 1950s. A humanistic choreographer, he uses narratives and deals with potent emotion conveyed through dramatic characters. At times his stories are specific to the African-American experience, as in his protest dance Rainbow ‘Round My Shoulder, but his choreography is universal in its implications.