On April 26, The Herb Alpert School of Music at CalArts welcomed master butoh dancer, Oguri, in a performance with Wadada Leo Smith and his creative orchestra Mbira as part of the school’s Visiting Artist Colloquium.

Audience members were still trickling into the Roy O. Disney Concert Hall for the noontime concert as Oguri began to dance in casual day-clothes. Completely improvisational, the piece developed into a mesmerizing work that incorporated a full costume change at mid-performance and ended with a powerful and intimate duet of sound and motion between Oguri and Smith.

The entire performance of Smith’s composition “Black Hole” was accompanied by the live improvisations of Mbira under the composer’s direction and was followed by a brief Q&A with Oguri.

We posted, above, an excerpt of Oguri’s performance at CalArts, and a photo of Wadada Leo Smith and his “Black Hole” sheet music, below. 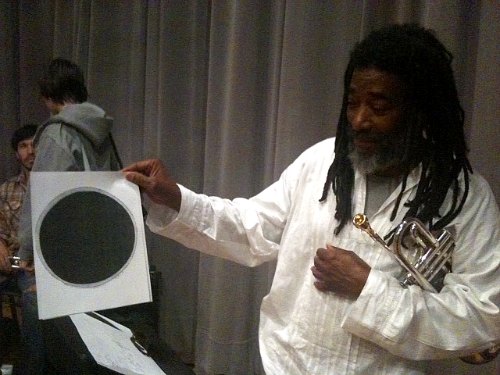 Smith and his 'Black Hole' score.