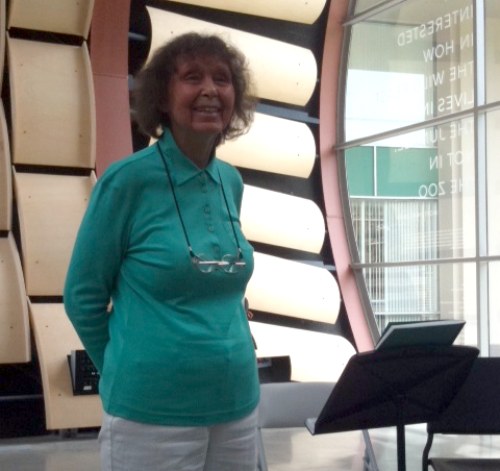 The Russian-born Sofia Gubaidulina is considered one of the great living contemporary classical composers. Her music is often marked by unusual instrumental combinations as well as the infusion of the spiritual and mystical.

Now in her 80th year, Gubaidulina is making a rare U.S. appearance, with her music being performed in four REDCAT programs, at a free concert at CalArts’ Wild Beast on Wednesday and culminating with a U.S. premiere of “Glorious Percussion” at Walt Disney Concert Hall in Los Angeles later this week.

She arrived at CalArts on Thursday to assist with rehearsals of the REDCAT Gubaidulina programs, which began yesterday (May 15) with an afternoon program that included an animated film The Cat Who Walked by Herself, scored by the composer, and concert works written for children.

In the midst of her hectic rehearsal schedule, Gubaudulina (with the help of translators) led a two-hour listening and Q&A session on Friday for CalArts students, faculty and staff, on “Glorious Percussion.” The dramatic piece places percussion front and center, and employs both fixed and improvisatory notes.

The score is an astonishing mix of contrasting – even contradictory – elements: earthy and ethereal, mathematically measured and freely improvised. There is a complementary sense of kinetic energy and ritual mystery in both the performance process and the sonic results. You do not have to be able to parse the ‘agreement of the sounding intervals with their difference tones’ to appreciate the distinctive spectral sheen on Gubaidulina’s chords, or identify the difference between a darabuka (Middle Eastern goblet drum) and an agogo (Yoruban single or double bells) to revel in the colors she produces from the percussion array.

While most of Friday’s discussion focused on the technical elements of the composition, Gubaidulina also answered a number of questions about her work and career:

Below, an excerpt of Gustavo Dudamel conducting the Berlin Philharmonic through “Glorious Percussion.” He’ll take up the baton again for the LA Philharmonic’s concerts this week.