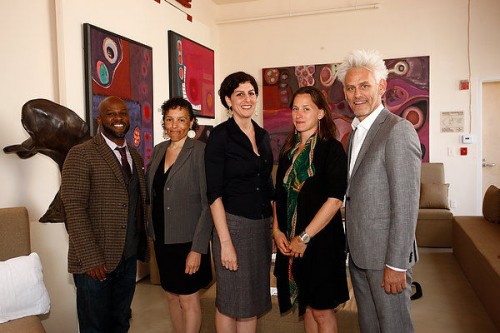 On May 19 at the Broad Stage in Santa Monica, The Herb Alpert Foundation and CalArts announced the 2011 winners of the 17th Alpert Award in the Arts.  The annual prize of $75,000, recognizes past performance and future promise to five exceptional mid-career artists working in Dance, Film/Video, Music, Theatre and Visual Arts, five of the six major fields of investigation at CalArts.

“Alpert Award artists make exceptional, innovative work,” said David Rosenboom, Dean of The Herb Alpert School of Music at CalArts and the Institute’s co-acting president. “The awards are agents of transformation and, with the support of The Herb Alpert Foundation, awardees can create the next directions in their fields.

“CalArts students reap the benefit as these exemplary artists come to campus for the residencies, a component of the prize,” Rosenboom added.

More information on the Alpert Award in the Arts