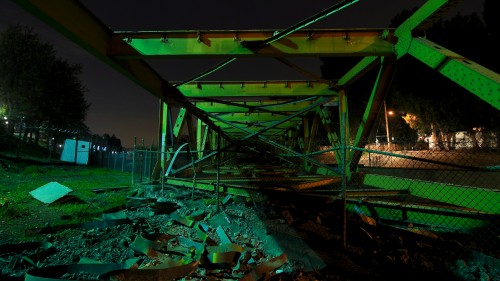 Tonight as part of the program Rock & Roll: Three Los Angeles Films, UCLA Melnitz Movies presents Andersen’s Get Out of the Car and Rappmund’s Psychohydrography along with the 1975 short film Hand Held Day by LA-based filmmaker Gary Beydler (1944-2010).

Get Out of the Car is a “city symphony film in 16mm composed from advertising signs, building facades, fragments of music and conversation, and unmarked sites of vanished cultural landmarks.” The music of Richard Berry, Johnny Otis, Leiber and Stoller, and Los Tigres del Norte is featured prominently in the film.

Set in Los Angeles and Rishikesh, India, Phantom Love is a surreal drama about a woman trapped within an enmeshed family, and her slow process of inner transformation and personal liberation.

Menkes will be in attendance for a Q&A session after the Saturday, June 4, Dissolution screening.