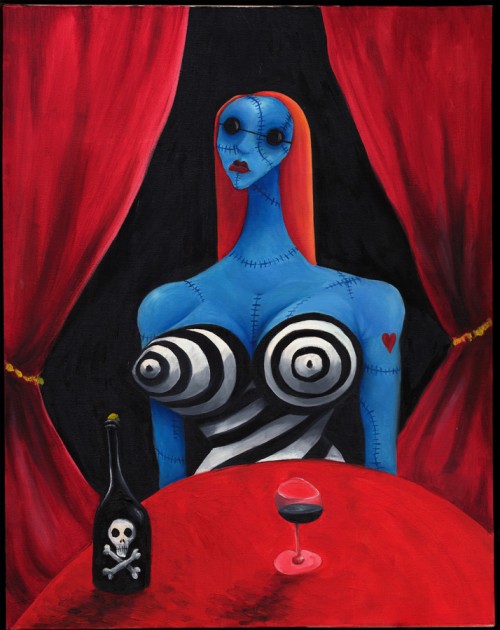 It’s been almost two years since the debut of artist-director Tim Burton‘s (Film/Video 79) retrospective at the Museum of Modern Art in New York. Now, the traveling exhibition of 700 drawings, paintings, photographs, film and video works, storyboards, puppets and costumes is on view at the Los Angeles County Museum of Art (LACMA) through Oct. 31.

Housed in the museum’s new Lynda and Stewart Resnick Exhibition Pavilion, the show explores the full range of Burton’s creative work, both as a director of live-action and animated films, and as an artist, illustrator, photographer and writer.

Burton’s love for drawing inspired him to study at CalArts, which led to a job as an animator at Walt Disney Studios before his film directorial career began with 1985’s Pee-wee’s Big Adventure (starring fellow CalArts alumnus Paul Reubens [Theater BFA 73]).

In its press release, LACMA notes:

Many of the works in the exhibition come from the artist’s own archive, as well as from studio archives and private collections of Burton’s collaborators. Hundreds of never-before-exhibited drawings, paintings, sculptures, and sketchbooks will be joined by a selection of domestic and international film posters from his feature films, accompanied by music specifically composed for the exhibition by Burton’s longtime collaborator Danny Elfman. Also included will be film props and a selection of large-scale Polaroids created by Burton, as well as virtually unseen films—including early student films.