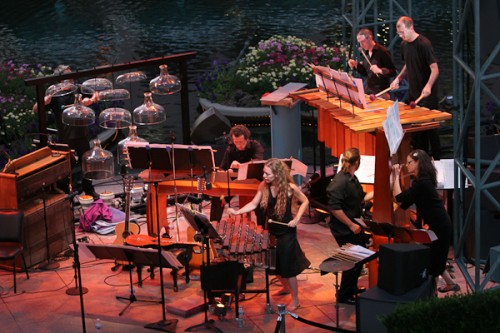 The ensemble Partch will perform works by Harry Partch at REDCAT this weekend. Photo courtesy of Partch

This Friday and Saturday, the ensemble Partch returns to REDCAT to perform works on instruments by the celebrated, inventive composer from whom it takes its name: Harry Partch (1901-1974).

The ensemble focuses on Partch’s music, much of which is created using instruments designed by Partch. The instruments are tuned according to the natural overtone series (known as just intonation), which creates a particular sound through the use of intervals not found in the Western tuning system. Partch created an array of custom-built instruments specifically for his compositions, unlike most composers.

Under the direction of John Schneider, Partch (the ensemble) will play instruments such as the Cloud Chamber Bowls, Kithara, BooBams, Chromelodeon, HypoBass and Adapted Guitars. For At the Edge of the World, the group has assembled a program of Partch’s compositions that features excerpts from Lyrics of Li Po, Castor and Pollux (streaming above), The Wayward and Summer 1955, including Ulysses at the Edge of the World, which was written for jazz great Chet Baker. In addition, a rare 1958 film documenting Harry Partch giving a tour of his Chicago music studio and conducting a recording session for Daphne of the Dunes screens both nights.

Listen to and “play” some of the Partch instruments via American Public Media’s American Mavericks’ interactive article, which includes recordings of Partch explaining each instrument.