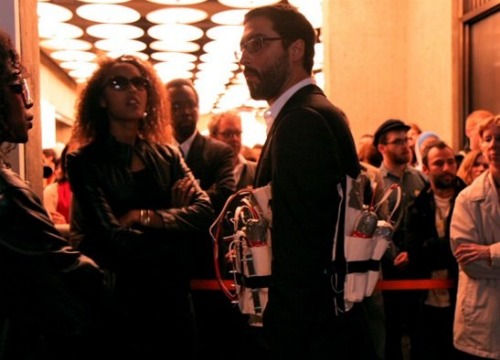 In a live, multimedia performance, Lars Jan (Theater MFA 08) and the Early Morning Opera invite Los Angeles to witness A Suicide Bombing by Invitation Only.

The work—which runs tomorrow (June 16) through Saturday at the Hi-Lite Gallery in Downtown LA—blurs the line between theatrical production and gallery installation.

“Lars is turning a suicide bombing into a red-carpet event,” said co-producer Miranda Wright (Theater MFA 09). “He’s capitalizing on current fears, events and cultural references, as seen through the lens of celebrity.”

Jan’s Early Morning Opera, an LA-based multidisciplinary art lab which he began at CalArts, is dedicated to using “new technologies to create baroque events.” His oeuvre, marked by a desire to reduce tensions between Western and Islamic countries through cultural exchange and satire, reflects his background as the son of an Afghan mother and Polish father who both fled the Soviet occupation of their countries.

Suicide Bombing by Invitation Only was originally commissioned by and performed at the Whitney Museum, and this week’s performances mark the piece’s West Coast premiere. 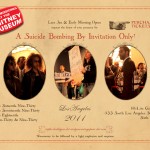