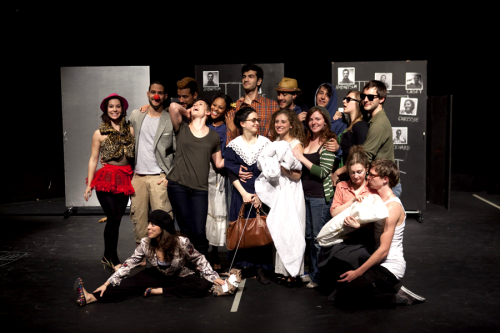 Moscow theater students and CalArts students in rehearsal at the Institute.

During this past Spring semester, students from the Russian Academy of Theater Arts in Moscow traveled 6,000 miles to work with CalArts’ School of Theater students, and earlier this month, a group of CalArts students returned the favor.

Arriving on June 1 in Moscow, the American students joined their Russian counterparts to co-produce a theater piece that premiered in Russia on June 12-14.

In 90 briskly moving and deeply felt minutes, the actors — half from CalArts, half from the Russian Academy of Theater Arts — revealed how facial expression and body language can communicate thoughts and feelings more potently than mere words.

The two dozen students who knew little of each other’s languages, created a mostly wordless play about “love and desire, pairing off and breaking up, searching and longing.” The production was the product of an 11-day experiment, which, according to Lally, appeared to yield results:

So the wild applause from a full house at the 400-seat theater, called the Theater Center on Strastnoi (an old Moscow boulevard), left [the students] relieved and exhilarated. As the audience left, they gathered in an upstairs lobby, where they sipped wine, toasted with the help of translators and marveled at what they had done.

The CalArts students traveled to Moscow under a grant arranged by the U.S. Embassy through the U.S.-Russia Bilateral Presidential Commission.

Mirjana Jokovic, director of Performance at the School of Theater at CalArts, hopes to continue the international collaboration beyond Moscow and Valencia, with more performances in New York, Paris and Belgrade. “I would like to see this go all over the world,” she said.

Above is a photo gallery documenting the first collaboration between the students at CalArts on March 3.