Disney/Pixar’s latest offering, Cars 2, opens in theaters nationwide on Friday (June 24) with CalArts alumnus John Lasseter once again in the director’s chair. The film follows the adventures of Lightning McQueen, Mater and their car pals as they traverse the World Grand Prix circuit and get mixed up in a case of international espionage.

In advance of the Cars 2 release, Lasseter was profiled in the Los Angeles Times on Sunday (June 18), focusing on his influence on animation:

In 2006, the Walt Disney Co. paid $7.4 billion for the privilege of hearing Lasseter’s voice loud and clear when it bought Pixar, the computer animation company he helped found. Pixar’s 11 feature films have grossed $6.5 billion worldwide and earned 40 Oscar nominations, becoming a rare Hollywood model of consistent success commercially and artistically. With the merger, he was made chief creative officer of both Disney’s and Pixar’s animation studios and a key advisor on Disney’s theme parks and its direct-to-DVD animated films.

The article also looked at Lasseter’s beginnings in animation and his initial disappointment with the field right out of college:

Lasseter’s Disney roots run deep — he studied in the first character animation class in 1975 at the Walt Disney-founded California Institute of the Arts and spent summers working at Disneyland as a skipper on the Jungle Cruise attraction. Though he landed his dream job as an animator at the studio straight out of college, it proved disappointing — Disney animation was in a creative funk in the late 1970s and early ’80s, and Lasseter’s eagerness was considered a character flaw by some senior animators….

Lasseter’s stewardship has worked out well for both studios — last year Pixar’s “Toy Story 3” became the highest-grossing animated film of all time, and Disney Animation’s “Tangled” was both a critical and commercial hit. Meanwhile, at $38 a share, Disney stock is trading about $13 higher than it was the year the company acquired Pixar.

Many consider Lasseter an animation pioneer, particularly in the CG (computer graphics) realm. He has often talked about the merging of the talents of both trained artists and computer specialists being a key to Pixar’s success.

The A113 Easter Egg Hunt

As we previously posted, Disney/Pixar animators tend to include the Easter Egg “A113” in each of their films. The number refers to the classroom at CalArts where many of Pixar’s greats got their start. If you take a closer look at the image of the state-of-the-art British spy jet Siddeley, the latest airborne addition to the Cars franchise, you’ll notice “A113” written on the tail. 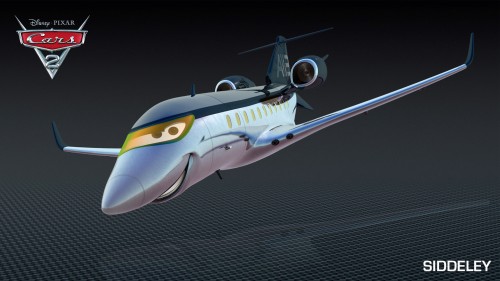