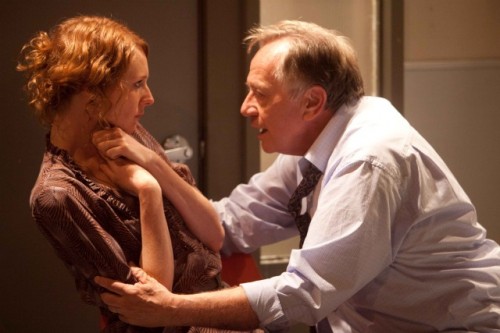 David Harrower’s play Blackbird made its Los Angeles premiere earlier this month at Rogue Machine inside Theatre/Theater in Los Angeles, and Sam Anderson—known to millions as the good-hearted, yet hapless “Bernard” from the ABC hit television series Lost—is garnering shining reviews for his performance.

And yes, it’s the same Sam Anderson that many people saw in CalArts’ hallways last semester when he taught the class One Act to Cinematic Events in the School of Film/Video’s Film Directing Program.

Harrower’s drama focuses on a confrontation between a young adult woman and the man who molested her a dozen years earlier. Instead of venturing into the made-for-TV melodrama territory, the taut production delivers a complex, complicated “love story”—of sorts.

From Charles McNulty’s review in the Los Angeles Times:

The situation here, potently brought to life at Rogue Machine, is treated as something of a love story — a pernicious, exploitative romance that refuses to release victim and perpetrator from its hellish grip….

The chemistry between Anderson and Cummins initially seems odd, but they inhabit the painful paradoxes of their characters with startling believability.

Anderson’s notices have been nothing short of stellar. From Stage and Cinema:

But Sam Anderson is giving a brilliant and devastating portrait of a man in the throes of a never-ending pain; and he takes the cadences of Harrower’s writing and elevates them into a rhythmic pattern of hesitancy and panic.

CalArts Fall 2011 class schedules are still being determined, and it’s not known whether Anderson will be back to teach at CalArts next semester, but we think he’ll do just fine with his day job.