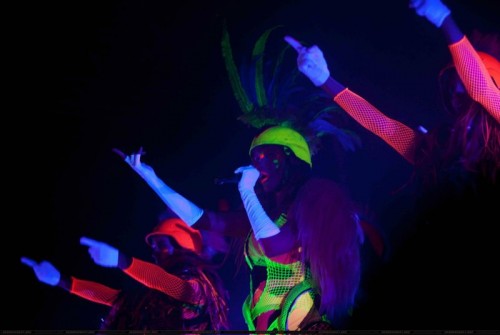 Often found on the red carpet, in music videos, commercials or inside pages of People magazine and US Weekly, Morante’s eye-grabbing original creations have been worn by pop celebs such as will.i.am, Fergie, Nicki Minaj, Ke$ha, Mary J. Blige, Pink, Rachel McAdams and Shakira.

He’s the principal behind the LA-based Marcomarco studios, which he founded a year after graduating from CalArts’ Costume Design program.

Although Morante started out in scenic design, he was advised to try his hand at costume design—then realized that he could make extra money by creating original T-shirts and selling them outside the CalArts cafe.

Now fast forward nearly a decade, and Morante’s designs are selling like cupcakes way beyond the Valencia campus. Katy Perry donned one of his most notable outfits—the cupcake brazier—in her California Gurls video.

The CalArts DIY spirit seems to be alive and well in his work. From Forbes Magazine:

“It’s such a rag-tag kind of process because a lot of times we get requests for things that nobody has really made and we’re not really sure how to do,” he says. “We spend a lot of time at Home Depot and the grocery store looking for materials that are going to read a certain way on screen.

“There are all kinds of fun materials out there that aren’t necessarily made for clothes that we are re-appropriating–caulking makes great frosting!”

Perry’s video is posted below to showcase Marcomarco’s distinctive style: