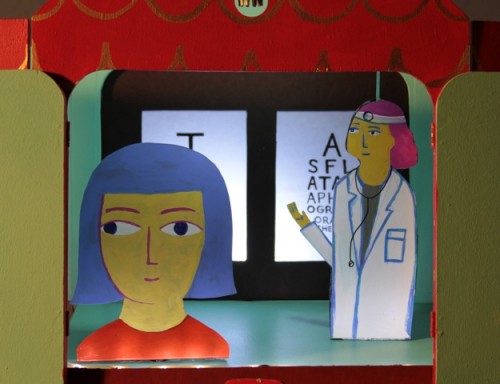 Works by Laura Heit at The Velaslavasay Panorama this weekend.

Bureau of Small Requests: The Department of Uncertainty is the first in a “76-part series of tabletop toy theater.”  Written and designed by Heit, the project draws its inspiration from the artist’s visit to Beijing’s Taoist Dongyue Temple with its 76 departments of the Taoist Pantheon. (Surrounding the temple’s central courtyard are 76 small rooms that house displays and sculptures of gods and spirits to help people with particular ailments or problems.)

Using puppetry and projection, Heit’s project invokes a sense of “ritual, poetry, pathology and supplication” to a person’s hope or fear. Also performing in the Bureau of Small Requests is Moira MacDonald, a current MFA student in the School of Theater.

Heit will also screen her new short film, Deep Dark, with live vocal incantations by sound artist and CalArts alumna Emily Lacy. Be forewarned, however, that the short is not suitable for children.