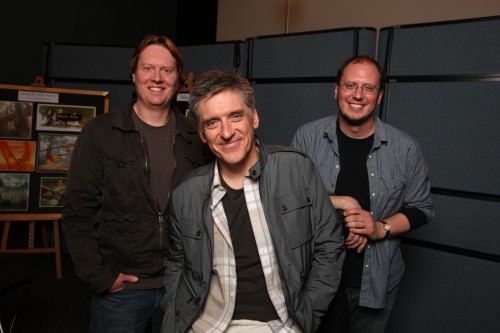 An old friend comes back to movie theaters this weekend—and his name isn’t Harry.

Disney’s Winnie the Pooh opens on Friday, flying a bit under the radar amid the publicity generated by the last installment of the Harry Potter juggernaut. But our favorite Pooh bear remains undaunted, garnering great early reviews.

A number of CalArts alumni worked on the film, including co-directors Stephen J. Anderson (Film/Video 91) and Don Hall (Film/Video 95). We sent over a few questions about working on Winnie the Pooh and their time at CalArts, and Anderson and Hall both graciously responded.

We’ll post their interviews separately on 24700, beginning with Anderson’s, below:

24700: Is the upcoming Winnie the Pooh a remake of a prior theatrical feature or short film? Or is it a new, original story?

Steve Anderson: Winnie the Pooh is a brand new story. We returned to the A.A. Milne books and based this movie on three of his original stories.

24700: You both were able to travel to England to see the inspiration for Hundred Acre Wood as well as original drawings from the Pooh stories. How did you translate those experiences into the film?

SA: Getting to walk in the footsteps of the real Christopher Robin was a complete joy for us! We absorbed all of the atmosphere and beauty of Ashdown Forest through photographs, drawings and paintings. Don and I, as well as our art team (Paul Felix, Rasoul Azadani, Sunny Apinchapong), are so proud of the results and we feel that we’ve created a Hundred Acre Wood like you’ve never seen on screen before.

24700: The trailer looks gorgeous. Is most of the film hand-drawn? What made you decide to go that route instead of the CG animation?

SA: Winnie the Pooh and his friends began as beautiful pen and ink illustrations by Ernest Shepard. Then the brilliant team at the Disney Studios brought them to the screen through drawing and painting and the beauty of hand-drawn animation.  So to us, that is how the characters should continue to be presented to an audience.

24700: All of our favorite characters (Eeyore, Kanga, Roo, Tigger) are back…do each of you have a particular affinity with one of the characters?

SA: I have to admit that I am very much like Rabbit. He is a bit of a control freak and so am I. I like to think that I can plan and organize everything and that it will all stay neatly in its place. But life always barges in, like Pooh, and upsets that balance.

24700: What one piece of advice would you give to CalArts’ filmmakers/animators who are just starting their careers?

SA:  The one piece of advice that I would give young animation filmmakers is to get comfortable with collaboration as soon as possible. As students, they are all individuals, making their own films and establishing their identities. But making animation out in the world is a totally different experience. Animated features involve armies of artists and technicians over a 3-5 year period.  The only way to survive that is to be open to feedback from those around you. Be an individual at your desk, to create new and exciting things. Then bring that to the table and let it evolve and grow with the rest of your team. See collaboration as a chance to make your work, and ultimately the project, better.

24700: Did you have one particular mentor/teacher at CalArts who inspired your work?

SA: I was fortunate to be in the department when it was run by Bob Winquist. He taught our Design class. There are some teachers who give you great  knowledge and technique.  Then there are some that give you all of that PLUS they teach you about life. That was Bob! He taught us all the design principles but more importantly taught us to put thought into everything we did.  Never do anything arbitrarily or because you “feel like it.” To Bob, life was design!

SA: So many great memories of CalArts!  Sitting in the dark, hunched over the old Oxberry camera, shooting my film. The sandwich lady who was constantly pimping the tabbouleh. The giant paper mache butt from someone’s art installation in the main gallery. Playing Lazer Tag in the empty halls in the middle of the night. But what I remember the most are all the great friends that I made, many of which I work alongside of today.