24700 had a chance to interview both Anderson and Hall (via email) about the film as well as their time at CalArts. We posted Anderson’s responses last week, and today, we’ve posted Hall’s interview below:

24700: Is the upcoming Winnie the Pooh a remake of a prior theatrical feature or short film? Or is it a new, original story?

DH: Winnie the Pooh is not a remake, but a new theatrical feature based on three of A.A. Milne’s original stories, told in the classical Disney hand-drawn style.

24700: You both were able to travel to England to see the inspiration for Hundred Acre Wood as well as original drawings from the Pooh stories. How did you translate those experiences into the film?

DH: Ashdown Forest in Sussex, England, is the actual location of the “Hundred Acre Wood.” Milne had a summer home there and that forest was where his son, Christopher Robin would play. Visiting that site had an enormous impact on us. We took our Art Director Paul Felix, our Head of Layout Rasoul Azadani and our Head of Backgrounds Sunny Apinchapong. We took tons of photos, and did several watercolors, and we all left there committed to have our version of the Hundred Acre Wood be as close as one could get to the real thing. It was almost like location scouting on a live-action film. We also had behind the scenes access to several museums in London, where we got to see E.H. Sheppard’s illustrations up close, which was awesome.

24700: The trailer looks gorgeous. Is most of the film hand-drawn? What made you decide to go that route instead of the CG animation?

DH: All of the film is hand-drawn.  There was some digital manipulation of drawn images in Effects, and the backgrounds were digitally painted in a watercolor style.  There was never any debate as to what medium we would tell this story in. It was hand-drawn from the beginning. Everyone felt that classic Disney, hand-drawn animation was the best way to tell this story. 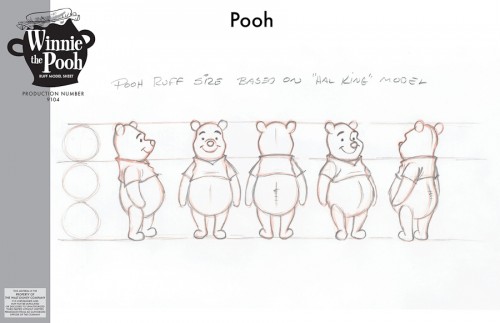 24700: All of our favorite characters (Eeyore, Kanga, Roo, Tigger) are back…do each of you have a particular affinity with one of the characters?

DH: I love Winnie the Pooh. He’s kind of become my hero. I just love that he’s a character that’s comfortable in his own skin, or fur, or fluff or whatever. He freely admits he’s “a bear of very little brain and long words bother him,” and he’s totally cool with that. He’s not trying to change it. In some respects, Pooh’s kind of like The Dude in The Big Lebowski. The Pooh abides.

24700: What one piece of advice would you give to CalArts’ filmmakers/animators who are just starting their careers?

DH: As far as advice goes, I would say observe life as much as possible. And I don’t mean to just draw from life. I mean observe life. Observe human behavior. Examine your own life. As a storyteller, and make no mistake, you are training to be a storyteller, you should have something to say, and it’s your responsibility to develop your “tools” so that you can better communicate with your audience, because, let’s face it, a storyteller without an audience is basically a a crazy old hobo who babbles to himself.

24700: Did you have one particular mentor/teacher at CalArts who inspired your work?

DH: Three instructors were really instrumental to me. Ken Bruce taught Freshman Story, and just kicked our butts. He taught by humiliating you in front of your peers, which is perfect training for the Story Department. Leo Monahan taught Color and Design, and he was tough but spectacular, and Corny Cole taught me what an artist really is. I should also give a HUGE shout out to Martha Baxton for being just generally sweet and awesome.

DH: I think my favorite memory from CalArts was the salute to Corny Cole we did my senior year. A bunch of us got together AFTER we turned our films in for the Producer’s Show, and animated 15 little “Corny Moments” that played as interstitials throughout the show. They were a huge hit, and the best part is, we kept it a secret from Corny, so we got to watch him enjoy them at the show. Awesome moment. It’s starting to dawn in me that I use the word “awesome” WAY too much, so I think this interview is over. Thanks!