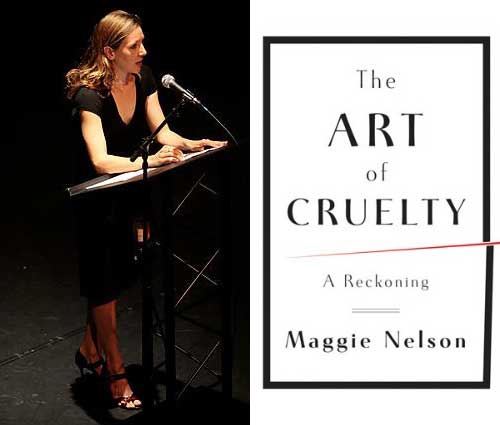 CalArts faculty member Maggie Nelson and her book, 'The Art of Cruelty'

***Nov. 28 Update: The Art of Cruelty: A Reckoning has been selected by The New York Times as one of the 100 Notable Books of 2011. Congratulations, Maggie!

From photos of tortured prisoners at Abu Ghraib in Iraq to slasher films such as the Saw franchise, violence, cruelty and gore are embedded in our modern psyche.

The “rightness” and “wrongness” of creating—and even showing—such imagery and works has often been debated, but CalArts’ School of Critical Studies faculty member Maggie Nelson probes beyond the usual discourse in her latest book, The Art of Cruelty: A Reckoning (Norton).

When art tests the limits of taste or wanders into territory that’s considered taboo, should we look or turn away? Does experiencing the work make us cruel?

Through numerous examples, Nelson provides suggestions on balancing the appreciation for controversial art with personal convictions. She examines both lowbrow and highbrow culture, including reality TV, the grisly works of Francis Bacon, Elizabeth Streb’s daredevil choreography that incorporates falls and collisions, and artist Chris Burden’s oeuvre. In the seminal 1971 art performance, Shoot, Burden had himself shot in the arm by a friend using a rifle at close range.

The Art of Cruelty was recently featured in The New York Times Sunday Book Review (July 17). In her review, Laura Kipnis notes Nelson’s “duality in her thinking”—a mixture of both condemnation and fascination with particular works of art.

Nelson understands that what makes violence so absorbing, as subject and spectacle, is the impossibility of separating what’s “out there” from what’s “in here,” and her distinction-­blurring trains of association model the problem. Most of us, as she points out, have “wily reserves of malice, power-­mongering, self-­centeredness, fear, sadism or simple meanness of spirit.” We do occasionally feel the urge to injure and destroy.

She suspects that the human condition is suffering. The best art dramatizes what happens when ethical impulses collide with the monsters within, but these enactments themselves leave behind a nasty residue.