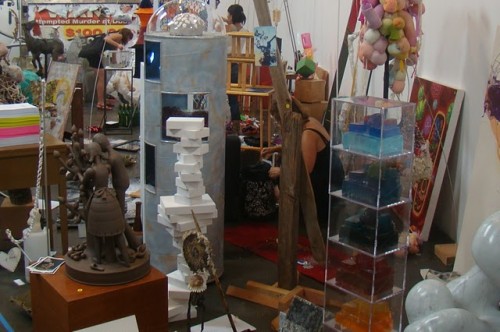 Yes, you read that last sentence correctly. Nearly 1,600 works—of mostly three-dimensional art—are on display. (The one caveat in participating in the show was that “no wall work” was allowed.)

The idea, originally conceived by Cummings and Harvey in 2006, began with letters to 10 artists that they admired, inviting them to join the show. The artists were then free to send out invitations to 10 other artists.

“These are artists with whom I developed a relationship of mutual respect,” said Cummings in a recent phone interview. He sent invites to Marnie Weber, Jeffrey Vallance, Jim Shaw (Art MFA 78), Lee Lynch (Film/Video BFA 05), Michael Hayden, Emily Mast and Marie Johnston, who’s an incoming CalArts MFA student, among others.

Cummings and Harvey also sent invitations to galleries and artists around the globe to see if they’d be willing to facilitate similar efforts in their areas. The inquiries yielded participation from galleries in Zürich, Berlin, Boston, London (online only), San Francisco, Philadelphia, Johannesburg, Seoul and Paris.

“Chain Letter was designed to comment on the art world as a social organism,” said Cummings. It also shows how quickly messages and information are communicated today as well as the power of connectivity among the global artistic community.

Chain Letter was originally scheduled to open on July 16—Carmageddon weekend in Los Angeles—so organizers pushed back the opening to the following week. The LA Weekly and those in the Twitterverse then dubbed the show: Artmaggedon.

From the LA Weekly:

Installation of “Chain Letter” took place on a single day—last Friday, July 22—which very quickly came to be known and reported on the social media interwebs as Artmageddon. Shoshana Wayne may have the interesting distinction of being the only art gallery in L.A. history to cause a SigAlert; there were so many cars trying to enter Bergamot Station to deliver artwork that by mid-day, traffic cops had to be called in to redirect cars to park on the surrounding streets.

From the reviews of Chain Letter, however, the art-induced chaos has proven to be well worth it.

Cummings solo exhibition: Beside My Self, opens at Steve Turner Contemporary in LA this fall.

From the Chain Letter installation: