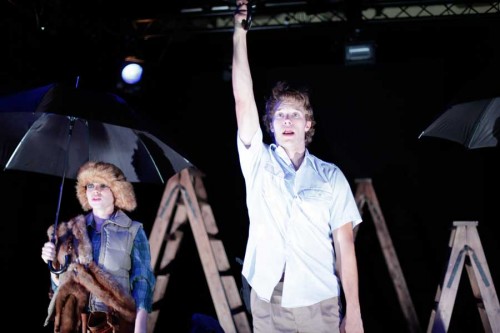 In our last Fringe 2011 installment, we noted that faculty member Marissa Chibas’ one-woman show Daughter of a Cuban Revolutionary was earning rave reviews at the Edinburgh Festival Fringe.

Also making waves across the pond are CalArts’ student productions.

CalArts’ School of Theater has brought one of Henrik Ibsen’s lesser-known works, Little Eyolf, to the Venue 13 stage. Directed by Julianne Just (Theater MFA 12), the CalArts production experiments with Ibsen’s text by adding a strong physical vocabulary and a soundscape made up of improvised sounds, including army drill songs, pop classics and Top-40 hits.

Here’s an excerpt from an Informed Edinburgh review:

There’s a good reason why Little Eyolf is one of Ibsen’s lesser known plays: the subject matter is so bleak it makes Hedda Gabbler look like an episode of Happy Days…

There are plenty of subtle directorial touches that conspire to build a moody and mysterious atmosphere, not least the use of a singing bowl to provide the bulk of the soundtrack…. This is a powerful piece of drama, artfully staged and impeccably performed, and a must see for all fans of naturalism.

Amy Tofte’s (Theater MFA 11) play, Flesh Eating Tiger, examines a relationship under the influence of alcohol with bits of dark comedy. The play features actors Sam Breen (Theater MFA 11) and Gabriela Trigo-McIntyre (Theater MFA 12). The actors are also double-cast in the production as the director and writer, respectively.

The most interesting manifestation of this experimental theatrical technique occurs when the director utters a line that wasn’t in the script. So compellingly executed, the implications of the moment are far-reaching. How much of our destiny [are] we really controlling? How often are we conscious and self-aware of what we’re doing? These are just a few of the themes explored in a drama that manages to be hilariously sad, violently compassionate, and believably surreal.

And in its review of Hôtel de l’avenir, a one-person play by performer-director Alexis Macnab (Theater MFA 13), the reviewer described Macnab as a “talented physical performer and a charming mime.”

Next from the Fringe, 24700 examines two works in Edinburgh from Leila Ghaznavi (Theater MFA 10).

All photos by Lily Gottlieb.