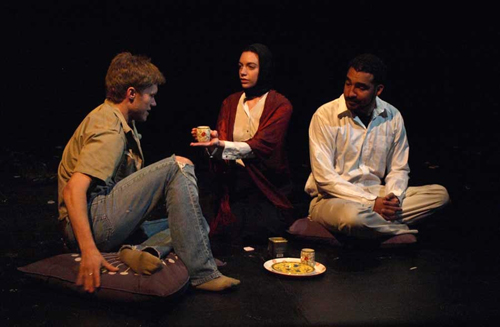 After garnering a nomination for the prestigious Fringe First award at last year’s festival for Silken Veils, Ghaznavi returns to Edinburgh with a remount of the production as well as another work, Broken Wing.  Directed and conceived by Ghaznavi, Broken Wing opened Aug. 5 and ran through Aug. 20.

Broken Wing is a one-hour play that’s set in rural Iran during the Damascus rose harvests. Two men’s best intentions for one woman trigger a series of events that culminate in a stoning.

I was driven to create Broken Wing because I wanted to create a piece that looked at the East/West cultural conflict, but not from a position of right and wrong. I wanted to explore how two ways of thinking, both well-intended, can come together in destruction through a lack of understanding. In this piece there are no strict protagonists or antagonists, just a world of good intentions.

Both productions have been getting rave reviews: