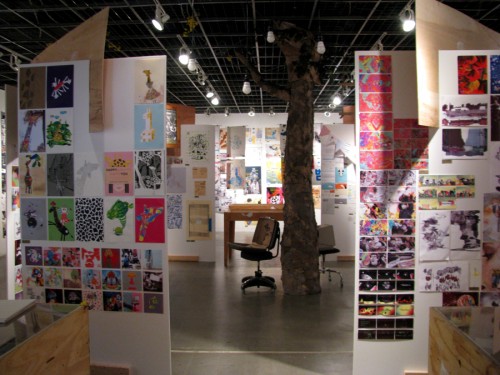 From this year's BFA graphic design show at CalArts.

The latest edition of Newsweek/The Daily Beast puts a spin on traditional college lists—breaking down the best schools in the country—for 25 different “types” of students. While future politicos and CEOs may opt for Harvard or the party-inclined can choose West Virginia or Alabama, when it comes to the arts, CalArts is the place to be.

The Institute was named the number one most artistic school in the country, followed by Emerson College and Berklee College of Music.

From the magazine’s statement of methodology:

To rank colleges across the country based on how imaginative their study body is, as well as how much the college fosters a creative atmosphere, we considered two metrics that quantify both: the percentage of students majoring in visual or performing arts and the number of official campus clubs devoted to artistic pursuits. We only looked at 4-year schools that admit less than 50% of applicants, to screen for the most selective of the creative colleges. Universities were ranked based on the percentage of undergrads in visual/performing arts (66%), as well as if the campus included any of the following 8 clubs (33%): drama, music ensembles, dance, film society, literary magazine, musical theater, student newspaper, and television station. All data is according to College Board.