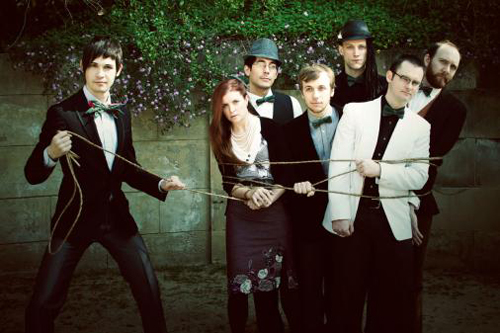 Tandem & Timur and the Dime Museum are featured on NOW Fest Week 3 this week.

Three works wrap up this year’s NOW Festival at REDCAT: a new puppet opera that probes the mythic mind of Daedalus; a solo from choreographer Michel Kouakou that connects the everyday to realms of the unknown; and a new work from Alpert Award-winning choreographer Victoria Marks indulging in the intimacy of the small gesture.

Puppet theater company Tandem joins with Timur Bekbosunov (Music MFA 08) and his band the Dime Museum for Zoophilic Follies, which includes twisted, Kurt Weill-inspired songs by Daniel Corral (Music MFA 07) and lyrics by playwright Sibyl O’Malley (Theater MFA 07).  The two ensembles combine forces to craft the new puppet opera that illustrates the mythic mind of Daedalus, the legendary inventor and craftsman who fashioned both the Labyrinth of the Minotaur and Icarus’ fated wings. 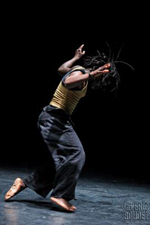 By creating sharp and precise dancing shifts to form segments of high speed choreography to moments of suspension, Michael Kouakou of Daara Dance performs a dance solo that “connects the everyday to realms of the unknown, the dark and the dead.”  Swaying much like a burlap sack looms, Kouakou serves as a metaphoric vessel for what weighs in the balance between what is visible and what is not.

As six dancers move together and apart, they shift between tightly defined improvisation and set material that resists representations of the indefatigable, herculean dancing body to explore human actions and impulses marked by the effects of time. She reveals the complex accumulations that inform her dancers’ bodies, while DJ d. Sadela Grimes adds his own layer of aural context to the work.