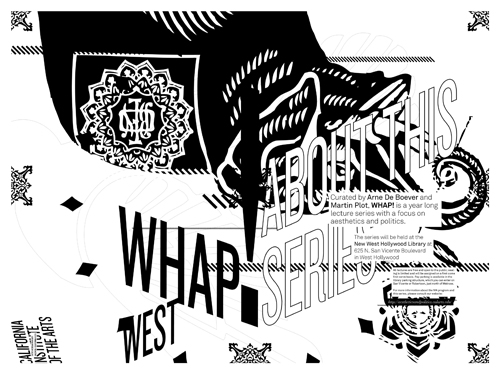 The West Hollywood Aesthetics and Politics lecture series (WHAP!) launches its inaugural event on Friday (Oct. 14) with a program on Street Art. On the dais are: Sam Durant (Art MFA 91), renowned political and multimedia artist and CalArts faculty member, Marquis Lewis (aka RETNA), a contemporary graffiti artist who successfully traverses the line between street and gallery art, and Jeffrey Deitch, director of the Museum of Contemporary Art in Los Angeles, which recently ran the successful Art in the Streets exhibition.

WHAP!, co-hosted by the CalArts Aesthetics and Politics MA Program and the city of West Hollywood, includes a variety of programming, ranging from critical and political theory to film screenings and conversations about art and architecture.

Arne De Boever, director of the Aesthetics & Politics program, says that the series was organized with the assistance and encouragement of CalArts alumnus John D’Amico, now West Hollywood councilmember. WHAP! is one of the first announced series to take place in the City Council Chambers at the new West Hollywood Library.

A complete list of this year’s WHAP! lectures follows: