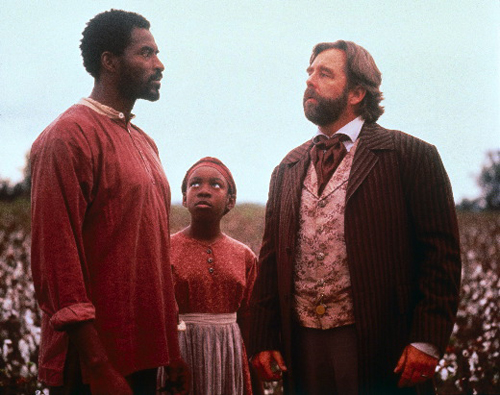 Tonight (Oct. 18) at 7 pm, filmmaker and CalArts faculty member Charles Burnett screens his 1996 film Nightjohn as the next installment of the Structuring Strategies film series and class held in the Bijou Theater. The 96-minute film about slavery in the pre-Civil War South stars Carl Lumbly, Beau Bridges and Lorraine Toussaint.

From the curator’s notes:

In this adaptation of Gary Paulsen’s inspirational novel, Burnett explores issues of racism and economic oppression while discovering an indomitable human spirit that manages to persevere. Instead of South Central Los Angeles, however—the frequent terrain of Burnett’s filmic investigations—the setting is a plantation in the antebellum South. Carl Lumbly gives an extraordinary performance in the title role as a slave who refuses to lose his humanity and passes on the gift of literacy to a young slave girl.

In 1997, the Film Society of Lincoln Center and the Human Rights Watch International Film Festival honored Burnett with a retrospective, Witnessing For Everyday Heroes, presented at Lincoln Center’s Walter Reade Theater in New York. The LA-based Burnett has also been awarded grants from the Guggenheim Foundation, the Rockefeller Foundation, the National Endowment for the Arts, and the J. P. Getty Foundation, as well as a John D. and Catherine T. MacArthur Fellowship (a.k.a. “the genius grant”). Burnett is also the winner of the American Film Institute’s Maya Deren Award, and one of the few people to be honored with Howard University’s Paul Robeson Award for achievement in cinema.

His film Killer of Sheep (1977) was placed on the Library of Congress’s National Film Registry in 1990.