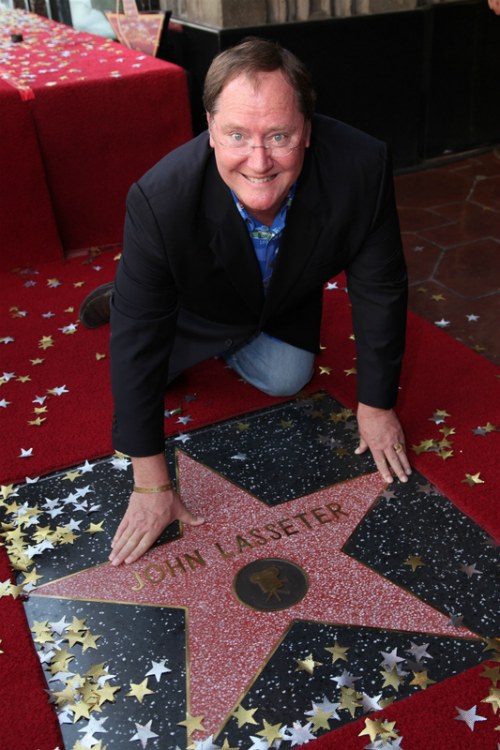 John Lasseter, chief creative officer of Walt Disney and Pixar Animation Studios, is on a roll.

Earlier this year, the CalArts alum (Film/Video BFA 79) was named one of The 2011 Time 100—a listing of the 100 most influential people in the world as selected by Time magazine. Other people receiving Time nods include artists, activists, business people and heads of state—such as Ai Weiwei, Geoffrey Canada, Mark Zuckerberg, Angela Merkel—whose ideas “spark dialogue and dissent and sometimes even revolution.” The producer, director and animator (Toy Story, Cars and countless other titles) also made Vanity Fair’s list in September when it announced The New Establishment: 2011, which included the magazine’s picks for a “new breed of buccaneering visionaries and entrepreneurs from the entertainment, communications, and computer industries.”

And now the 54-year-old Lasseter can add another accomplishment to his ever-growing resume: Last week, he was officially inducted into the Hollywood Walk of Fame receiving his own star on Hollywood Boulevard, directly in front of the El Capitan Theatre.

The same day of his induction, The New York Times published an e-mail interview with Lasseter from questions posed by fans and Times readers who asked Lasseter to look back at his career and his influences. One question asked specifically about the influence of CalArts.

Q. Your class at CalArts included several of today’s most visionary filmmakers: yourself, Henry Selick, Tim Burton, Brad Bird, John Musker. Each of you has mastered your own individual aesthetic and method of storytelling that are setting new standards in Hollywood today. This can’t be a coincidence, can it? What was in the water at CalArts? — cm62442, Tempe, AZ

A. It was pretty magical. We were in the very first year of the character animation program in the School of Film/Video at CalArts. The original instructors were all these amazing Disney artists that had gone into retirement, and so they came out of retirement to teach us. All of them, except one, had never taught a class before. It was just amazing. I remember Ken O’Connor, our layout teacher, had this very dry Australian humor. He said, “I’m not the teacher, I will just tell you what I think you need to know.” We learned a tremendous amount from them, and we also would sit and listen to their stories about working at the Walt Disney Studios and working with Walt, developing this new art form. The stories had a tremendous impact on me, you know, the way things worked, the ideas they had back then, what they were striving for, we got very close to them.

And what Disney had done is taken a list that they had collected of very interested young people who had been writing to the Disney studios for years saying that they wanted to work for Disney. From that, they sent out letters to this whole list, which included me since I used to write to the studios and visit them, and so the first two classes of the character animation program formed a great part from this list. So we got together, and it was this really exciting feeling of coming together. I had an interest in cartoons, animation and Disney that nobody else at my school or my friends had. So when we came together at CalArts, all these people with exactly the same passion, we learned as much from our fellow students as we did from our instructors.

Also at that time – I went to CalArts from 1975 to 1979 – it was a time of this explosion of American filmmaking: George Lucas, Steven Spielberg, Martin Scorsese, Francis Coppola, Stanley Kubrick, just unbelievable films were being made, and there were new techniques, like the steadicam, and it was so exciting and so inspirational. Those films were entertaining audiences at new levels. “Star Wars” came out at the end of my second year. The new level of entertainment that was being achieved by these filmmakers, it inspired me to do that in animation. And our teachers filled us with this belief of being able to achieve the impossible.

Whether or not there was anything in CalArts’ water in the 70s may be debatable, but what isn’t is Lasseter’s lasting imprint on the entertainment industry.