The group, which champions a “minimal” sound within the confines of a traditional jazz trio, released its 2010 debut album, First, to high acclaim. 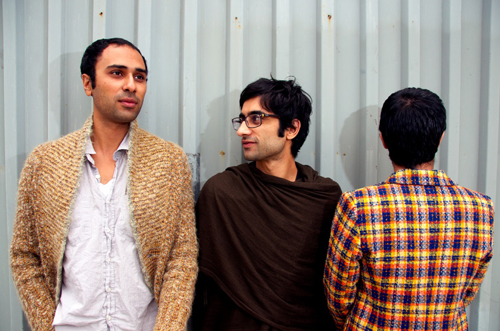 Kashmir focuses on the complex demographic, religious and sociopolitical struggle in the Kashmir region of the Indian subcontinent—a region in which Israni and Naqvi share familial roots. The trio partnered with three filmmakers on the project: Prashant Bhargava and India-based Aamir Bashir and Shanker Raman.

More about the project from Dawn of Midi:

Kashmir is an interdisciplinary concert piece exploring how the recording and rewriting of history have been accelerated by the advent of information technologies, and the effect of that phenomenon on personal and cultural memory. The performance will place this investigation in the context of the territorial conflict over Kashmir. Visually, the performance will consist of multiple projections of processed video, creating a tapestry that acts as a visual counterpoint to the rhythmic and harmonic texture of the music, a three-movement composition by Dawn of Midi.

The American premier of the piece will take place in New York in 2012. The group is also busy preparing their sophomore album to be released on Thirsty Ear Records this year.