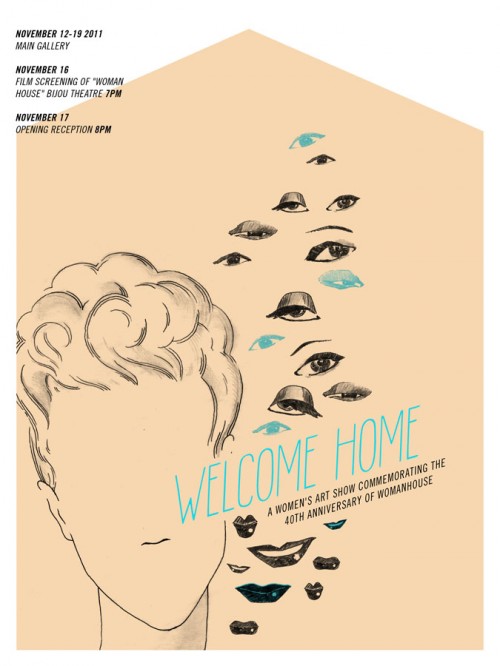 Featuring the work of more than 30 female student and alumni artists, Welcome Home showcases the modern feminist perspective through a variety of media.

“We thought as a new generation, we had a responsibility to carry out this legacy of strong woman artists and artwork,” said Arreguin. “Womanhouse was a very powerful installation that proved that women could create their own path in the art world,” added Shusterov.

From the curators’ statement:

Through discussing the importance of this specific moment in feminist art history with our community of artists, we have become inspired to continue the discourse in a contemporary context and carry out the legacy of our foremothers. We feel that the importance of knowing the history and tradition of Feminism is critical in dealing with the issues that women are presented with today. It is our duty as a new generation of women artists, to honor and uphold the school’s rich political history.

In 1971, CalArts’ Valencia campus was still under construction, so Chicago, Schapiro and their students took over an abandoned mansion in Hollywood, in which the artists were given rooms to create work. The project encouraged the artists to take the female activity of homemaking to exaggerated, fantasy proportions, while also testing societal limitations as both women and artists.

When Womanhouse officially opened its doors in January 1972, it became the first public feminist art exhibition and made LA the epicenter of the movement. Some of the rooms were striking—such as Chicago’s Menstruation Bathroom, which displayed both new and used feminine hygiene products, Robin Weltsch’s Kitchen and Vicki Hodgetts’s Eggs to Breasts.