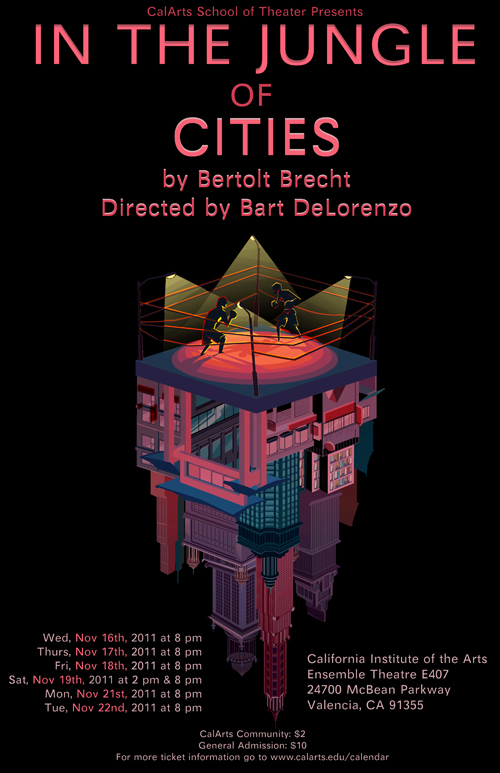 In the Jungle of Cities, a play written by legendary playwright and German modernist Bertolt Brecht, tells the story of a battle of life and death between two metaphorical boxers amid the wilderness of a newly urbanized city.

The theater production, directed by CalArts guest artist and faculty member Bart DeLorenzo, runs in the Ensemble Theatre (E407) at CalArts tonight through Saturday; and Monday and Tuesday evenings (Nov. 17-19, 21-22) at 8 pm.

From the producer’s notes:

Brecht tells an alarming tale of survival and conflict. On a morning like any other morning, Shlink, a lumber merchant in the Chicago underworld, confronts a young book clerk, George Garga, and offers to buy his opinion. Garga refuses to sell himself at any price, and the fight ensues. Stakes are raised and gradually their fortunes, their families, and the entire city are drawn into the match.

DeLorenzo says that the 11 scenes of the play represent the 10 rounds of the combat, with an extra scene devoted to the victor, after the other combatant has been “knocked out.”

Written in 1923 when Brecht had just turned 25, the work “expresses both his attraction to the excitement and danger of the modern city, as well as his criticism of the dehumanizing effects of capitalism and mechanization.”