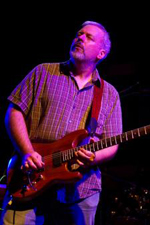 The one-night only performance of Keneally’s The Universe Will Provide marks the U.S. premiere of the work, which was originally commissioned by the Netherlands’ NPS Radio for the Metropole Orkest, and recorded by it in 2004.

Since working with Zappa, Keneally has released 20 well-reviewed recordings and has toured widely with such ax wielders as Steve Vai and Joe Satriani.

More from REDCAT about the The Universe Will Provide:

His gripping, vivid blend of orchestral timbres and a traditional fusion rhythm section also incorporates sound collages (and even adds more than a few pop-cultural and musical references from Stanley Kubrick and Wendy Carlos to Looney Tunes).

Above is a video from the the Metropole Orchestra’s performance of the piece, and below is the track Room from the work.