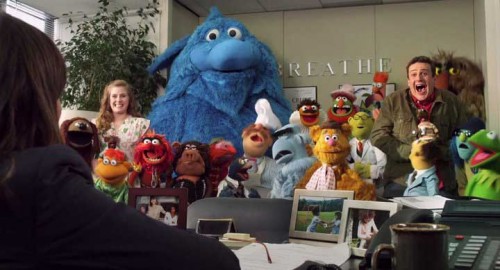 With the feature film The Muppets opening nationwide this week, puppeteer Chase Woolner, a fourth-year BFA student in CalArts’ School of Theater, can cross another item off his bucket list.

“It’s been a dream of mine to work with the Muppets,” says Woolner, who shared with us old photographs of himself as a young child posing with Gonzo and Dave Goelz, one of the lead Muppet performers, and with Kermit the Frog in another (in the gallery above).

Woolner got The Muppets gig after meeting Steve Whitmire, who took over performing as Kermit after Muppet creator Jim Henson’s death in 1990. Whitmire and Woolner met at a lecture at the Center of Puppetry Arts in Atlanta in January 2010, and when it came time to cast the puppeteers, Whitmire remembered the student’s work from the lecture.

That conference connection translated into working as a junior hire for Puppet Heap design studio in New Jersey and eventually as a background puppeteer on The Muppets when it filmed in Burbank last winter.

Puppeteering has been a part of Woolner’s life since age 5, when he started performing with Red Moon Puppet Theater in Chicago; soon after, he became the youngest member of the San Francisco Bay Area Puppet Guild.

***Nov. 28 Update: 24700 has just learned that CalArts Character Animation faculty member David Skelly also worked as a puppeteer on The Muppets, performing several characters throughout the film, including The Swedish Chef, Lew Zealand, Robin the Frog, Dr. Strangepork and Link Hogthrob, among others.