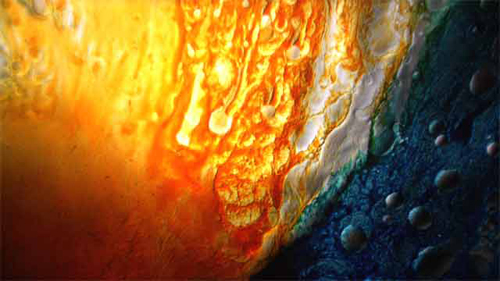 A still from Michael Scroggins' 'Limn.'

On Tuesday (Dec. 13), the Structuring Strategies screening series welcomes Michael Scroggins, director of the Computer Animation Labs at CalArts, for the video program What Are You Looking At?

A pioneer in animation performance and video art since the early 1970s, Scroggins was a member of the legendary liquid light show group Single Wing Turquoise Bird (1967-75), who painted images on large screens to accompany bands such as the the Velvet Underground, Grateful Dead, Steve Miller Band, Taj Mahal, Dr. John, BB King and The Yardbirds, and created other works for smaller, more intimate performances spaces.

Scroggins joined the faculty of CalArts School of Film/Video in 1978, and has built a portfolio around exploring gesture capture in the creation of real-time absolute animation in fully immersive virtual reality.

He has also continued to perfect liquid projection techniques, most recently in the film Limn (6 min., 30 seconds, HD 1080p), which has its world premiere tonight. The work is another in a series of high-definition digital recordings of continuous takes of live liquid light projection performances.

Among Scroggins’ seven other films being screened tonight is What are you looking at? (1970/1973), which opens with a brief moment with artist Nam June Paik in the CalArts Burbank campus parking lot in 1970. The film then moves to a casual morning’s recording at a Hillside House in Topanga Canyon, 1973. “The synchronicity of developing events unfolds in a dance of subjective and objective relationships revolving around the question quoted in the title.”

In addition to the Structuring Strategies program, Scroggins and several other original members of Single Wing Turquoise Bird will perform next month at Experimental Digital Arts at the Broad Art Center as part of the Pacific Standard Time initiative. The collective will be joined by CalArts’ Guitar faculty member Miroslav Tadic and Friends in two evenings of real-time projection and live music on Jan. 25 and 26.