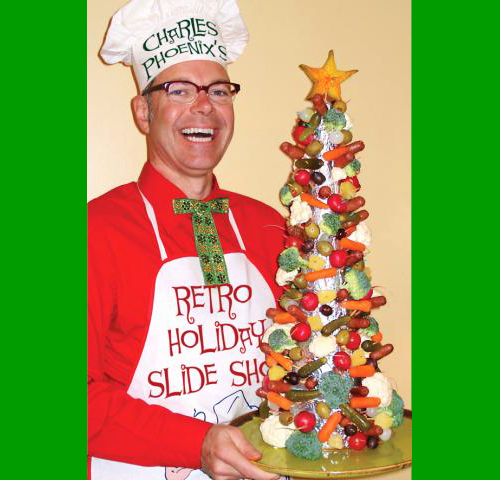 This Sunday (Dec. 18), pop culture humorist Charles Phoenix comes to REDCAT bearing his large collection of vintage slides documenting holidays past. The connoisseur of Americana, Southern California kitsch and everything retro “roasts and toasts mid-century life and style” at two holiday shows at 3 and 7 pm.

Phoenix’s beloved annual offering gives glory to the spirit of celebration, including holidays from throughout the year, in one time-traveling journey. Experience politically incorrect New Year’s Rose Parade floats, a bizarre Lamb Cake Contest on Easter Sunday, and an explosion of patriotic pride on the Fourth of July. Followed by howlingly funny homemade Halloween costumes, the truly tragic life of a Thanksgiving turkey, and a Yuletide bondage party.

Phoenix, who’s crafted a niche for himself in forecasting retro-inspired trends, has made television appearances with Conan O’Brien and Martha Stewart and was featured on NPR’s All Things Considered.

Tickets to the 7 pm show are sold out and matinee tickets are going fast. For those attending, festive holiday dress is not only encouraged—”if not expected!”

Below is a video clip of Phoenix discussing his slide show with O’Brien in a December 2010 appearance on TBS’s Conan.