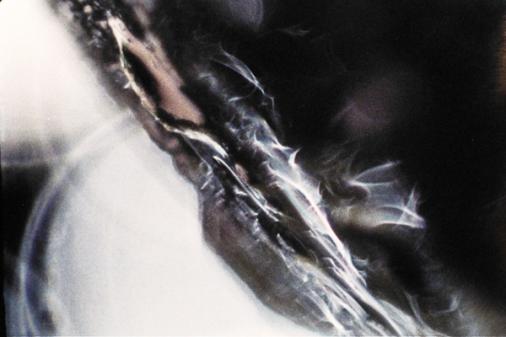 One CalArtian filmmaker—School of Film/Video faculty member Betzy Bromberg—captured a spot on Dargis’s short list with her film Voluptuous Sleep, which screened at both REDCAT and at CalArts earlier this year. The film is a “meditation on the nuances of light, sound and feeling evoked through the poetic artifices of cinema.”

Dargis wrote about the film in October, when it screened at the New York Film Festival’s Views from the Avant-Garde:

Betzy Bromberg’s hypnotic “Voluptuous Sleep” demands similarly liberated viewing. Shot in 16 millimeter, divided into two separate if complementary sections and wonderfully scored, it is composed of abstracted, often blurred images that verge on the very edge of the recognizable if not graspable. The film opens with dancing squiggles and ribbons of white light that give way to a column of rushing water and, still later, blurred patches of green, blue and red that suggest an immersive, glorious natural world (a trajectory that evokes the beginning of Genesis). Time and again Ms. Bromberg folds light flares (from light shining into the lens) into the image, a poetic affirmation that film isn’t only about the world as we see it through our eyes but also as it’s revealed through a camera.