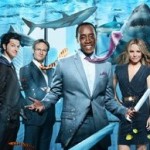 The half-hour dark comedy focuses on a team of unscrupulous business consultants Galweather & Stearn, led by fast-talking Marty Kaan (Cheadle) and a team that includes Kristen Bell and Josh Schwartz, who bilk America’s 1 percent by spinning numbers, twisting facts and confounding them with PowerPoint presentations—all while billing them by the hour.

The role is a departure for Cheadle, probably best known for his 2004 film Hotel Rwanda, in which he portrayed hotel manager Paul Rusesabagina, who housed more than 1,000 Tutsi refugees during their struggle against the Hutu militia in Rwanda. He earned an Academy Award nomination for his work.

In House of Lies, the veteran actor adds depth and complexity to an amoral character. From New York Magazine:

But Cheadle brings subtlety to a character that could have gotten away with leaning on its topicality. While Marty appears to be a man without principles—as aggressive and predatory as any of his mostly white alpha-male colleagues (he preaches “dissing” the client “like a pretty girl so she’ll want you … to make them think they’re almost perfect”)—as an ­African-American man, he is going to be held to a different standard. (Okay, there’s some political resonance there, too.) ­Marty has to occasionally over­compensate and, in one instance, even has to step back altogether and let his white female protégée take over and close the deal with a racist client. His negotiations with race, and, inevitably, racism, lend nuance to what could be a too easily detestable character.

In the above Showtime video, Cheadle talks about the new show and his early days as an actor, even giving a nod to his alma mater.