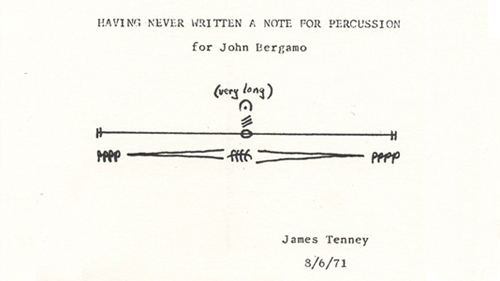 Late CalArts faculty James Tenney's 'Having Never Written a Note for Percussion' (1971) will be performed by Danny Holt (Music MFA 06) in Room 3 of the Welcome Inn in Eagle Rock on Sunday. | Image: SASSAS

This Sunday (Jan. 29), the Society for the Activation of Social Space Through Art and Sound (SASSAS) transforms the Welcome Inn motel—located in the Los Angeles neighborhood of Eagle Rock— into “a six-hour tour through key moments in LA’s experimental music history” with Welcome Inn Time Machine. The free Pacific Standard Time event, which runs from 4 until 10 pm, features more than a dozen concurrent micro concerts in individual motel rooms, revisiting experimental works created in Southern California between 1949 and 1977. 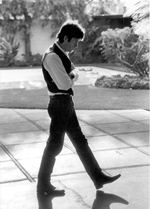 Tenney’s series of 11 indeterminate scores composed between 1965 and 1971 were printed on post cards (“score cards,” as Tenney referred to them). Most of the 11 works were produced while Tenney taught at CalArts between 1971 and 1976. Several CalArts alumni are among the 13 musicians performing the work on Sunday.

In Tenney’s obituary for the Los Angeles Times in 2006, Mark Swed wrote, “To some extent, [Tenney] was the ultimate Western composer. He approached each new piece as an adventure, with the goal of discovering original territory and, if need be, taming some theoretical musical beast or acoustical bugbear.”

As part of the event, CalArts faculty member Barry Schrader presents a two-hour recording of electro-acoustic music studio works that were originally on the Currents series at the Theatre Vanguard between 1973 and 1978 in Los Angeles. 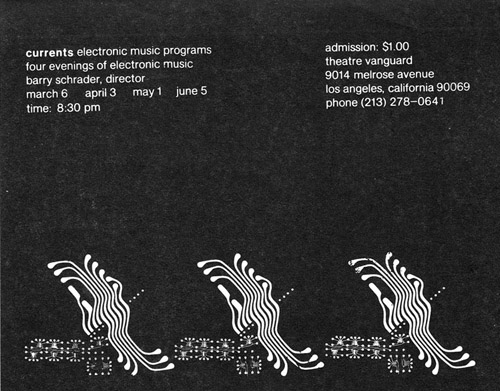 In addition to Schrader’s piece, works by Pierre Schaeffer, Louis & Bebe Barron and Vladimir Ussachevsky are on the program in Welcome Inn’s Room 22, which runs continuously from 4-10 pm.

A full schedule of performances at the Welcome Inn can be found here.