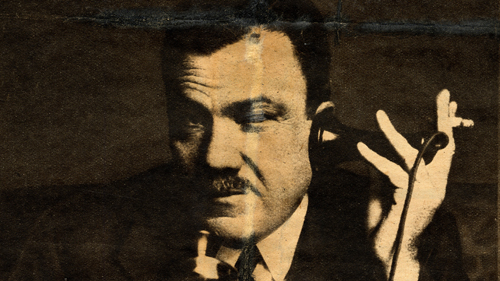 Natalia Almada, the 2011 Alpert Award recipient in Film/Video, is currently in residence at CalArts this week. In addition to holding a workshop with School of Film/Video students, Almada screens two of her films in CalArts’ Bijou Theater this week:  El Velador (The Night Watchman)  and El General. Exploring experimental and documentary cinema, her films often grapple with ideas/issues of identity, history, violence, memory and loss.

Tonight, the weekly Structuring Strategies series screens Almada’s 2011 film, El Velador (The Night Watchman), at 7 pm.  A.O. Scott of The New York Times calls the film an “unsettlingly quiet, even lyrical film about a world made and unmade by violence.”

From the Structuring Strategies program notes:

Night after night, Martin watches over the extravagant mausoleums of Mexico’s most notorious drug lords like a guardian angel. Set in a massive, labyrinthine cemetery in the hours between dusk and dawn, El Velador (The Nightwatchman) is a peaceful meditation on violence. Natalia Almada’s haunting documentary reminds us that even today, during the turmoil of Mexico’s bloodiest conflict since the revolution, ordinary life persists.

On Friday (Feb. 3), Almada screens El General (2009) in the Film Today class in the Bijou Theater from 4-7 pm.  The film was the winner of the Documentary Directing Award at the 2009 Sundance Film Festival:

In 1910 a revolution erupted in Mexico, among its rallying cries “the right to vote.” Nearly a century later “Sufragio Efectivo” is heard again as thousands take to the streets. Through the legacy that filmmaker Natalia Almada inherited as the great-granddaughter of Mexican president Plutarco Elias Calles (1924-1928), one of Mexico’s most controversial revolutionary figures accused of having been a “Dictator”, “Iron Man” and “Nun-Burner”, yet also acclaimed for having been the “father of modern Mexico,” El General is a portrait of a family and a country under the shadow of the past.