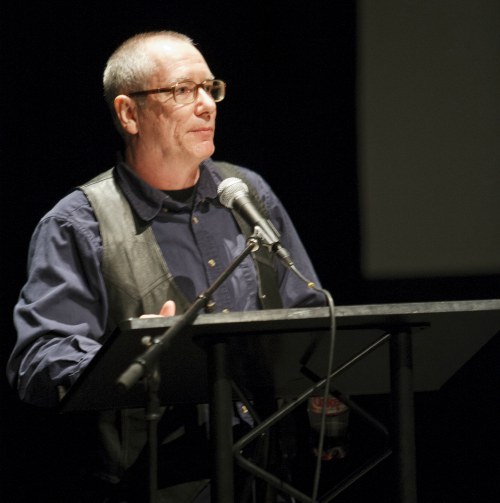 Mike Kelly at a screening of his film 'Day Is Done' at REDCAT in 2007. | Photo: Steven A. Gunther

Born in Detroit, Michigan, in 1954, Kelley became entrenched in a local proto-punk scene that fomented such bands Iggy and the Stooges and MC5. In 1973, Kelley formed his own “anti-rock” band, Destroy All Monsters, with his then-fellow University of Michigan art students Jim Shaw, Niagara (Lynn Rovner) and filmmaker Cary Loren.

In 1976, Kelley and Shaw (Art MFA 78) left the band to attend graduate school at CalArts, where Kelley studied with teachers that included John Baldessari, Douglas Huebler and David Askevold. In a 2003 interview, he had also counted a number of CalArts visiting faculty—especially Laurie Anderson, Jonathan Borofsky and Judy Pfaff—among some of his important influences.

Alongside his art practice, his passion for music continued as he formed another band Poetics, with fellow CalArts students John Miller (Art MFA 79) and Tony Oursler (Art BFA 79).

“Mike was an intellectual who expressed himself in a visceral way,” said Tom Lawson, dean of the CalArts School of Art. “He would take on his public and make them react—to engage them emotionally.”

Kelley’s work focused on themes of working class alienation and the darker side of American life; he often combined elements of high and low art. Added Lawson, “He was able to merge big ideas and more makeshift material…

“On a mundane level, Mike was one of the early CalArts artists who chose not to go to New York and prostrate themselves in front of an uncaring gallery system,” noted Lawson. “He stayed in Los Angeles and it proved to be more productive for him since his subjects were here.”

In 2007, REDCAT held the world theatrical premiere of Kelley’s video work, Day Is Done, a feature-length musical that examines American subcultures and folk events through the “restaging of 31 carnivalesque productions intermixed into a meandering semi-narrative.”

Most recently, as part of the Pacific Standard Time initiative, Kelley and PictureBox publisher Dan Nadel curated the exhibit, Return of the Repressed: Destroy All Monsters 1973-1977, at PRISM Gallery in West Hollywood, Calif., which showcased work by Kelley, Shaw, Loren and Niagara. Accompanying the exhibition was a catalog published by PRISM and PictureBox, edited by Kelley and Nadel. The exhibition closed on Jan. 12.

Kelley’s work has also been selected for inclusion in this year’s Whitney Biennial, which opens on March 1.