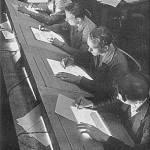 As the Getty Foundation’s citywide Pacific Standard Time initiative continues to celebrate the history of contemporary art in Los Angeles, tonight (Feb. 8th) CalArts President Steven D. Lavine presents a conversation on the Chouinard Art Institute, one of CalArts’ predecessor institutions, at REDCAT at 8:30 pm.  The event examines the legacy of the Institute that was founded in 1921 by Nelbert Murphy Chouinard (1879-1969), which became one of the early forces in LA’s emerging art scene.

More about the conversation from REDCAT:

Joining the discussion are Chouinard alumnae Alice Estes Davis, a renowned costume designer noted for her exceptional work with Walt Disney, and Gianina Ferreyra, a filmmaker currently creating a documentary about Chouinard’s founder and her influential art school. In conversation with invited guests, Estes Davis and Ferreyra share perspectives on Chouinard, and its significant impact on the arts in Los Angeles. Illuminating selections from Gianina’s documentary-in-progress are screened as part of the evening. 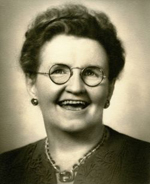 Chouinard’s vision for her Institute was the establishment of an important art school on the West Coast, convinced that “even though the talents and ambitions of individuals vary greatly, the same intellectual and spiritual development is necessary to the portrait painter and commercial illustrator alike.”

Throughout the 1950s and 1960s, Chouinard Art Institute was known for its open environment and for progressive instructors such as Richards Ruben, Emerson Woelffer and Robert Irwin. Besides training aspiring animators, Chouinard attracted many talented artists as students and faculty. Students included Joe Goode, Ed Ruscha and Judy Winans, who helped produce the design journal Orb (1959–60) while attending the school.

In 1961, Walt and Roy Disney guided the merger of the Chouinard Art Institute and the Los Angeles Conservatory of Music to establish California Institute of the Arts with the assistance and counseling of Lulu May Von Hagen, then chairman of the Conservatory. A decade later, the school moved to its current campus in Valencia, California.