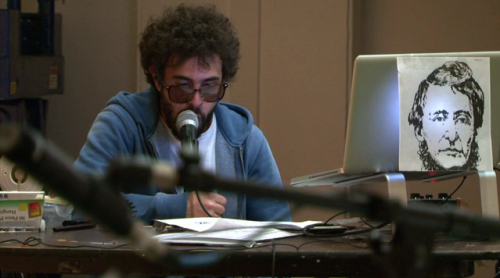 Last weekend, while much of America was at home watching the Super Bowl, a number of students, faculty and alumni from The Herb Alpert School of Music at CalArts, took over the Institute’s public spaces for a rare performance of John Cage’s complete Song Books (1970). The collection of 89 short music-theater works, includes songs, songs with electronics, directions for a theatrical performance, as well as directions for a theatrical performance with electronics.

1 From August to October of 1970, John Cage (1912-1992) completed one of his largest music-theater works, Song Books.  He conceived the work as a two-volume collection of 89 separate pieces simply called “Solos for Voice”.  Some of these solos called for singing, conventional or otherwise.  Other solos require no singing at all, but rather reproduce the word-game actions of Cage’s Theater Piece (1960).  Still other Solos are examples of another kind of theater altogether, one which clearly reflects the influence of the neo-Dadaist Fluxus movement.  Instructions for some of these Solos ask the performer simply to “prepare something to eat” or to “perform a disciplined action that fulfills an obligation to others.”

2 As in many of Cage’s works, Song Books is indeterminate with regard to performance.  Any number of singers and actors decide upon a length of time they want the piece to last, choose freely among the 89 pieces, and put them in any order they wish.  In addition, the score allows the possibility for a number of other works to be performed simultaneously with any one Song Books performance: the Winter Music (1957), Concert for Piano and Orchestra (1958), Indeterminacy (1959), Rozart Mix (1965), and others.

The performances at CalArts lasted approximately four hours, but the video posted below, edited by Institute photographer Scott Groller, provides a two-minute taste of the Song Books happening.