There’s been a number of performances of avant-garde pioneer John Cage’s music lately for a reason: 2012 marks the composer’s 100th birthday (Sept. 5, to be precise). As experimental music fans around the world converge on festivals honoring Cage’s music this year, REDCAT presents the John Cage Centenary Festival tonight and tomorrow night at 7 and 8:30 pm, respectively. The two nights feature rarely played compositions, including major works by Cage and other pieces by composers responding to Cage’s oeuvre.

CalArtian musicians play a major role in the festival. Tonight, the New Century Players, the professional new music ensemble of The Herb Alpert School of Music at CalArts, team up with the CalArts Orchestra to bring several large-scale pieces to life. The concert is scheduled an hour and a half earlier than typical REDCAT concerts to allow for the expansive line-up of works to be performed:

The second evening of the festival welcomes back the New Century Players  for a performance of Cage’s seminal graphic score Fontana Mix. More from REDCAT:

[Fontana Mix is] a telling example of the composer’s fascination with the ideas of indeterminacy, chance, and silence. In addition to the original Fontana Mix tape music composition itself, the program consists of solo and small ensemble works by Cage, and works composed referencing the Fontana Mix score or using the Fontana Mix materials by Cage himself, and by composers responding to Cage’s benchmark.

On the program for tomorrow night’s concert: 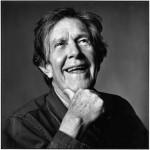 As previously posted on 24700, CalArts kicked off the John Cage festival on Feb. 5 with an intensive workshop that focused on interpreting, preparing and performing Cage’s classic musical/theatrical composition Song Books (solos for voice, 3–92). The large-scale performance of the piece included at least one rendition of all 90 solos—a very rare occurrence in the piece’s history.