CalArts faculty member Ulrich Krieger, a composer and member of the Lou Reed-helmed band, Metal Machine Trio (MM3), presents a new rendition on MM3’s 1975 album, Metal Machine Music. The world premiere of the multichannel, 3D soundscape Metal Machine Trio: The Creation of The Universe kicks off tonight (March 1) with a talk by Krieger about the project at the University Art Museum at California State University Long Beach at 7 pm.

The audio installation exclusive to the museum features a 3D listening experience of the trio, which is composed of Reed on processed and unprocessed guitars and mini continuum, Krieger on tenor sax and electronics, Sarth Calhoun on live processing and continuum fingerboard and an additional member, multi-instrumentalist John Zorn.

More about the project from the University Art Museum:

A live recording of Metal Machine Trio, a 2009 performance with Lou Reed, Ulrich Krieger, Sarth Calhoun and John Zorn at the Blender Theatre in New York, using special microphone techniques by the sound engineers acousticians at Arup, forms the basis of this special Project Room exhibition. In collaboration with the Arup team in New York, Reed was able to recreate the same sonic perspective he had while performing the composition onstage. 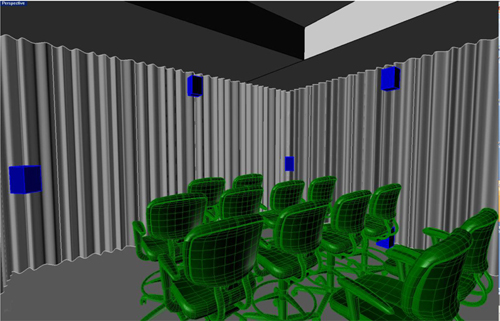 When visitors step into the spotlighted center area of the Arup SoundLab Installation, they stand where Lou Reed stood and experience the full depth of the piece. The installation in the Project Room at the University Art Museum uses 14 loudspeakers in an spherical arrangement to create a fully immersive 3D SoundLab. The complete Metal Machine Trio performance, clearly features all four instrumentalists’ perspectives; it runs continuously through four sixteen minute compositions. Each of the four musicians’ parts are unstructured compositions and include over an hour of over-modulated feedback and guitar effects, intricately mixed at varying speeds by Reed himself.

The installation runs through April 15.

Above is a video of the 2009 performance of MM3 at the Blender Theatre in New York.