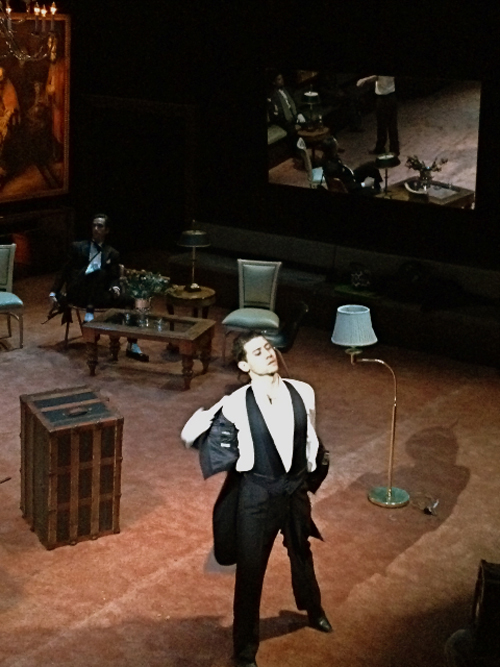 Production still from 'A Splendid Death' at CalArts

Adapted and directed by visiting artist and CalArts alumna Maureen Huskey (Theater MFA 09), the experimental work uses fragments of Genet’s prose and interviews to weave together a ritualistic tale of criminality and power. The production is inspired by American gangster and film noir dramas. 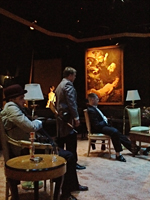 Set in the late 1930s, A Splendid Death “lures audiences into a fallen world where facades of luxury and masculinity disguise the desire for rebellion.” The story of seven gangsters who are surrounded by police in a hotel is also a character study of Genet himself. (Huskey has included Genet within his own play to explore his ideas about life, death and desire.)

“While I found the text fascinating, I also found it oblique and was baffled about how one would direct it in order to make it accessible to audiences,” says Huskey, an International Rotary Fellow, Princess Grace Honorarium Award recipient and current Creative Capital Foundation Professional Development Leader. “Genet, in my mind, was directly confronting–more than any other play he wrote–his own experience of pre-war homosexuality, his iconic themes of the ‘other’ and the conflation of the saint and the criminal.”
In an email, producer Rachel Sherbill (Theater MFA 14) explains further about Genet and the production’s origins:

The original Genet’s work, Splendid’s, was never supposed to be seen or read by the public. He wrote the play in 1948 and in 1952 announced that he destroyed all copies of the manuscript. His publisher, however, managed to save one copy, which was published in 1995 (nine years after Genet’s death) and translated into English by British playwright Neil Bartlett.

Very few productions of this play have ever been staged in the United States. After some extensive research, I was only able to discover three or four other US performances.

To get into the spirit of the production, audience members are encouraged to wear formal attire to the performances.