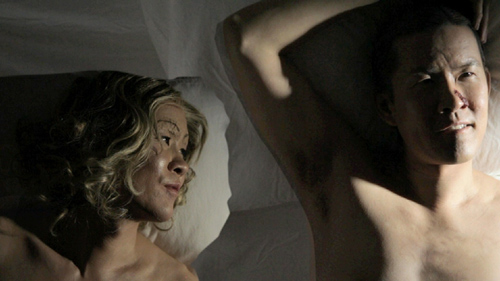 Shot on location in the Gallery at REDCAT, Wong’s reinterpretation, Making Chinatown, transforms the exhibition space into a studio backlot and examines the original film’s constructions of language, performance and identity. With the artist cast in the roles originally played by Jack Nicholson, Faye Dunaway, John Huston and Belinda Palmer, key scenes are reenacted in front of printed backdrops that are digitally rendered from film stills and kept intact within the video installation.

Much of Wong’s work involves world cinema and popular forms of entertainment, working through the visual styles of well-known directors in order to emphasize how subjectivity and geographic location are constructed by motion pictures.

Making Chinatown will remain at REDCAT through April 1.