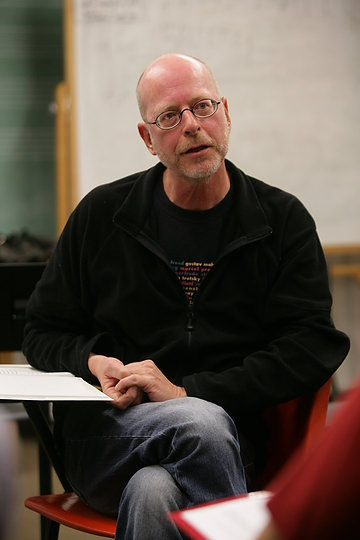 MicroFest—celebration of nonstandard tuning and the sonic beauty that falls “between the keys”—holds its next installation in Pasadena on Saturday (March 17) featuring the work of composer and CalArts faculty member Wolfgang von Schweinitz, performed by CalArts alumnus Andrew McIntosh (Music MFA 08) on violin and Scott Worthington on double bass.

An excerpt from Swed’s review:

For a year and a half there was hardly a peep from Wolfgang von Schweinitz in the public sphere.  You certainly would not have known from the much-publicized Los Angeles Philharmonic announcement last week of its major festival of California music next season that perhaps the leading European figure to have embraced microtonality and other aspects of the West Coast scene is now in our midst.

But Saturday night at REDCAT there was, finally, a peep — and very big peep at that.  A superb Norwegian violinist, Helge Slaatto, and an equally superb German double bass player, Frank Reinecke, gave the U.S debut of Von Schweinitz’ “Plainsound Glissando Modulation.”  The subtitle is “Raga in Just Intonation.”  It lasts 80 minutes.  It explores a wondrous sonic universe.  It is mesmeric music.

Founded by microtonal guitarist and radio personality John Schneider in 1997, MicroFest has grown into a festival of several concert events held throughout the year at various Southern California venues. Co-directed by Schneider and composer Bill Alves, the festival’s history has included premieres of works by Ben Johnston, Lou Harrison, Terry Riley and Harry Partch with new and historical instruments.

Listen to an excerpt from Raga