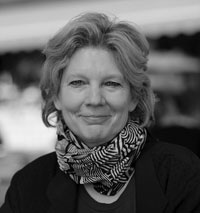 Last month, the Bronx Museum of the Arts was selected to present the U.S. Pavilion at the 2013 Venice Biennale, one of the oldest and most prestigious contemporary art exhibitions in the world.

CalArts alumna Carey Lovelace (Music/Critical Studies BFA 75), an independent curator and art critic, and Holly Block, executive director of The Bronx Museum, were also named co-commissioners and organizers of the Pavilion, which will feature a large-scale, site-specific installation by artist Sarah Sze.

Block and Lovelace proposed Sze for the Biennale, who was eventually selected by the State Department’s Bureau of Educational and Cultural Affairs. In her piece, Sze plans to modify the building’s structure without actual physical change.

Titled “Triple Point,” Sze’s installation will engage the architecture of William Adams Delano and Chester Holmes Aldrich’s 1930s pavilion in the Giardini, modifying and distorting it without actually changing it in any way, in the museum’s description. Sze will craft complex and delicate installations from her trademark accumulations of everyday materials, discarded objects and kinetic devices like electrical fans. In a Web-savvy twist appropriate for this most global of shows, an online component will allow users to live-stream video of the commission’s fabrication and installation.

“Sze’s boundary-defying work engages architecture and space, challenging the viewer by reorganizing reference points, disorienting and reorienting at every turn,” says Lovelace. “Her ephemeral installations strike a balance between spectacle and poetry, with unparalleled potential to transform and invigorate the U.S. Pavilion.”

Lovelace is no stranger to large-scale exhibitions. Another recent curatorial project was Iannis Xenakis: Composer, Architect, Visionary (co-curated with Sharon Kanach). The exhibit, on view in several museums worldwide, including MoCA in Los Angeles, explored the role of drawing in the work of pioneering avant-garde composer Iannis Xenakis.

The Venice Biennale will run June-November 2013.