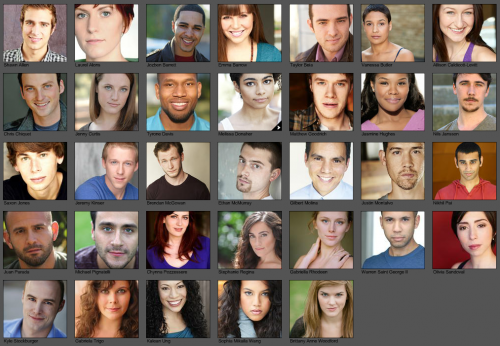 While most CalArts students gear up for a much-needed Spring Break next week, there’s no rest just yet for the graduating classes of MFA and BFA actors in the School of Theater. They’re flying to New York for the annual Acting Showcase on Monday (March 26).

The showcase allows 33 actors to perform before a number of industry professionals, including producers, agents, managers, casting directors and theater companies by presenting scenes from both published and original plays.

This year, with the project under the direction of Theater faculty member Robert Cucuzza (Theater MFA 11), the showcase includes a video element which features the actors both on stage and screen.

Showcase allows the actors to put into practice all that they’ve learned, as well asprovide additional performance, career and self-marketing tools to help make asmoother transition from the academic to the professional world,” says Cucuzza.

Following the New York showcase, the actors prepare for the West Coast edition on April 23 at The Falcon Theatre in Burbank.

Below is the list of actors and the scenes they will perform:

On Monday (March 26), read the 24700 Q&A with Showcase director Cucuzza and Dean of CalArts School of Theater Travis Preston.